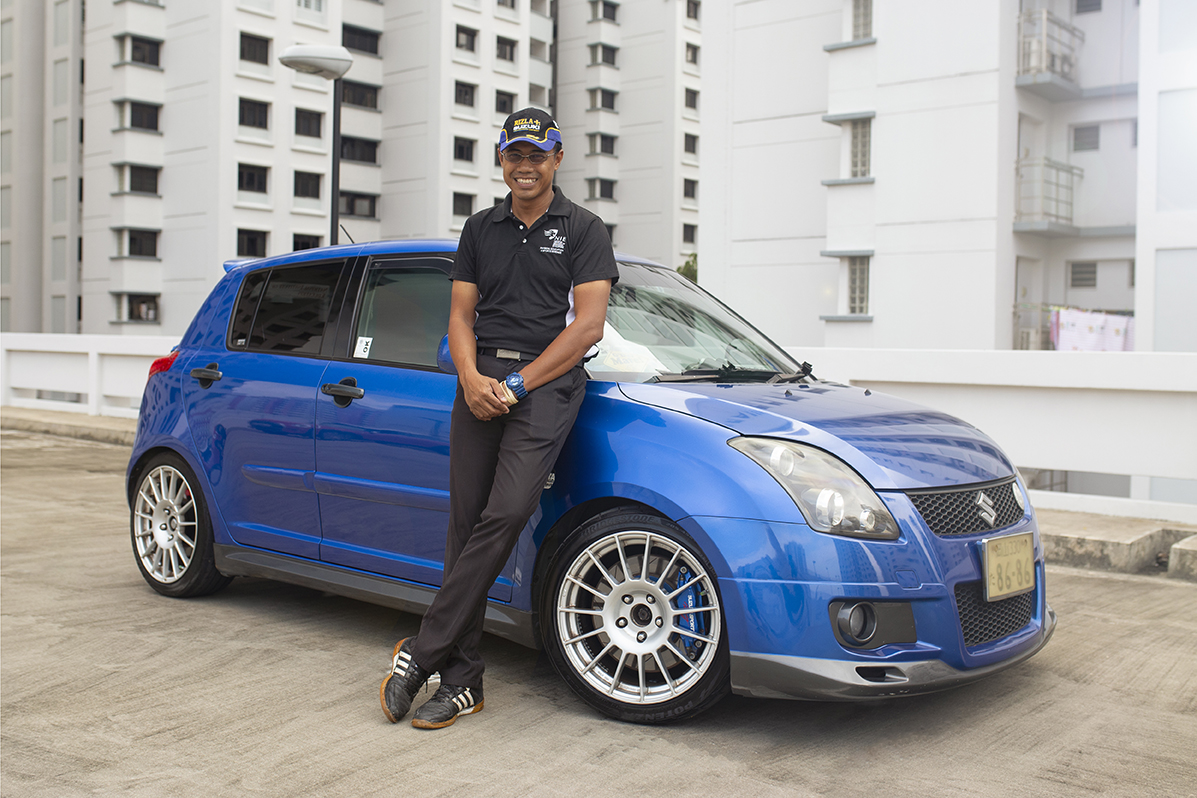 Ask any petrolhead to recommend an affordable, fun-to-drive hatchback, and it’s inevitable that the words “Suzuki Swift Sport” will roll off their tongues.

Thanks to the Swift Sport’s capabilities coupled with low Certificate of Entitlement (COE) premiums during the 2006-2010 period, it’s little wonder that the second-generation Swift Sport was Singapore’s best-selling performance hatchback at the time. 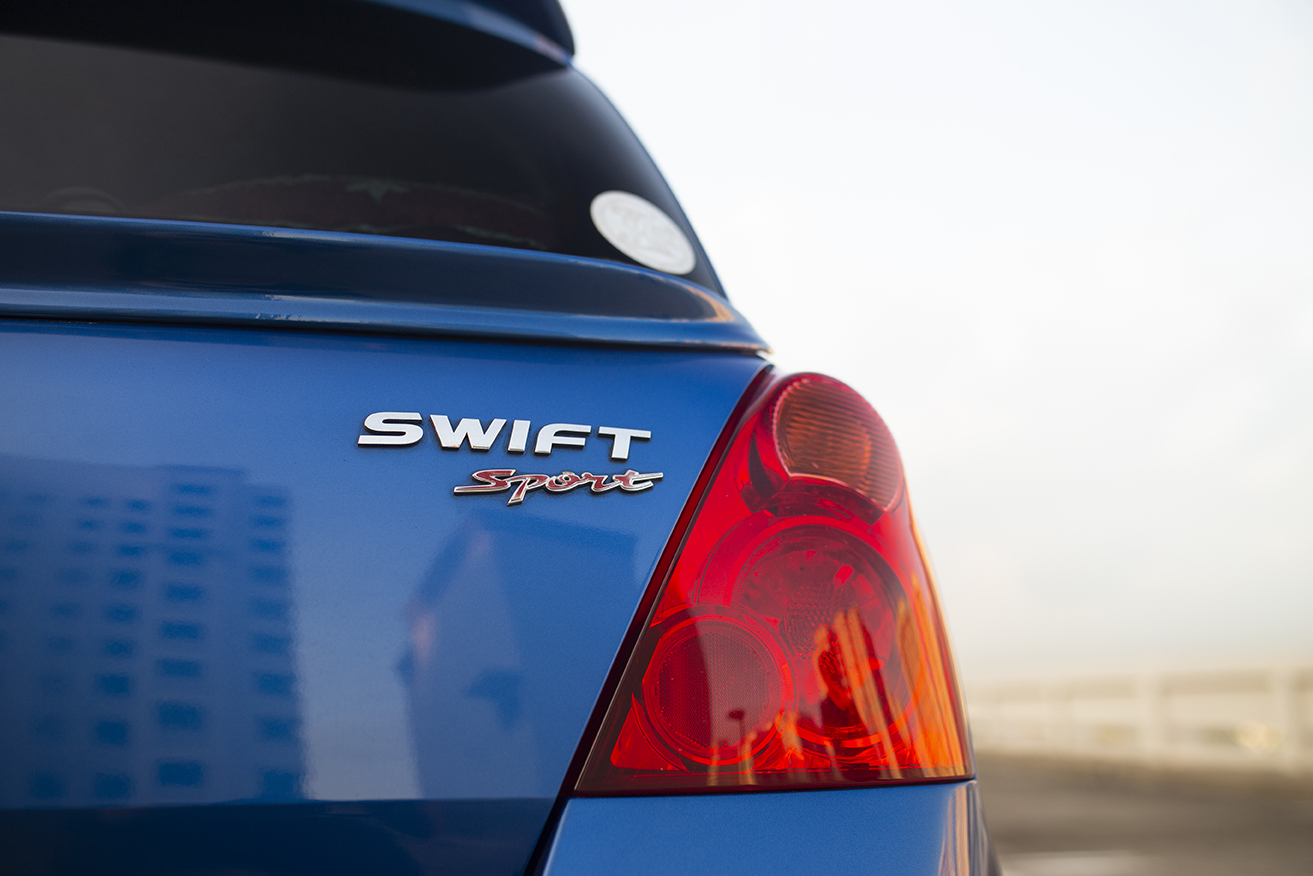 Its success isn’t just in the local context, however – look all around the world and you’ll see that the Swift has been used in a large variety of motorsports formats. Time attack challenges, gymkhana competitions, and rally cross have had Swifts in their line-ups, and from 2006-2010, there was even a factory-backed team running a Swift ‘Super 1600’ in the FIA Junior World Rally Championship. 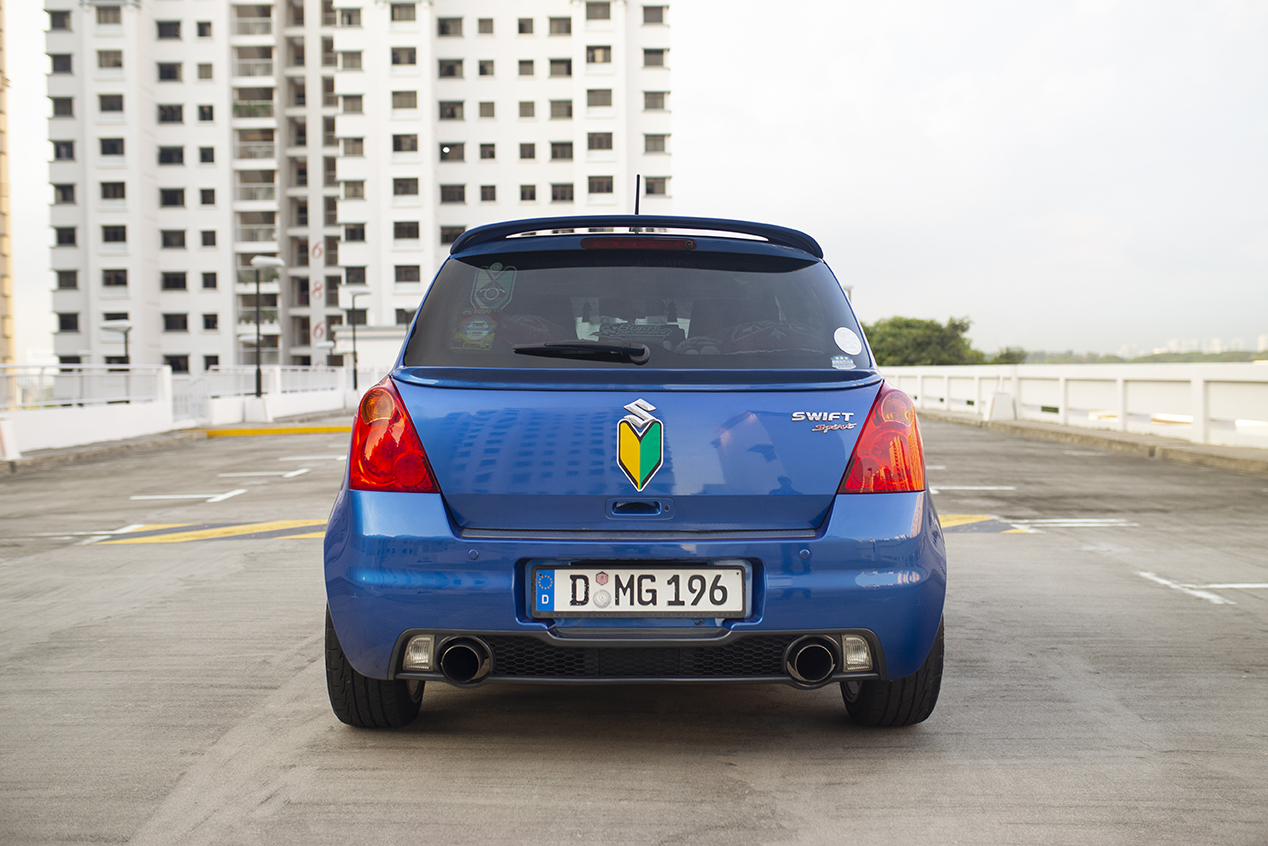 Despite looking a lot like the standard Suzuki Swift, the Sport’s got a lot more going for it – larger wheels, stiffened suspension, a quicker steering rack, a close-ratio gearbox and racy new bumpers (with twin exhaust outlets at that!) to top it all off.

This Suzuki Swift Sport here belongs to Azlan, an educator to not just young minds in classrooms, but also to any enthusiast who’s keen to talk cars. A sentimental soul, Azlan’s named his trusty little Swift Sport ‘Taro’, a nod to its Japanese roots. 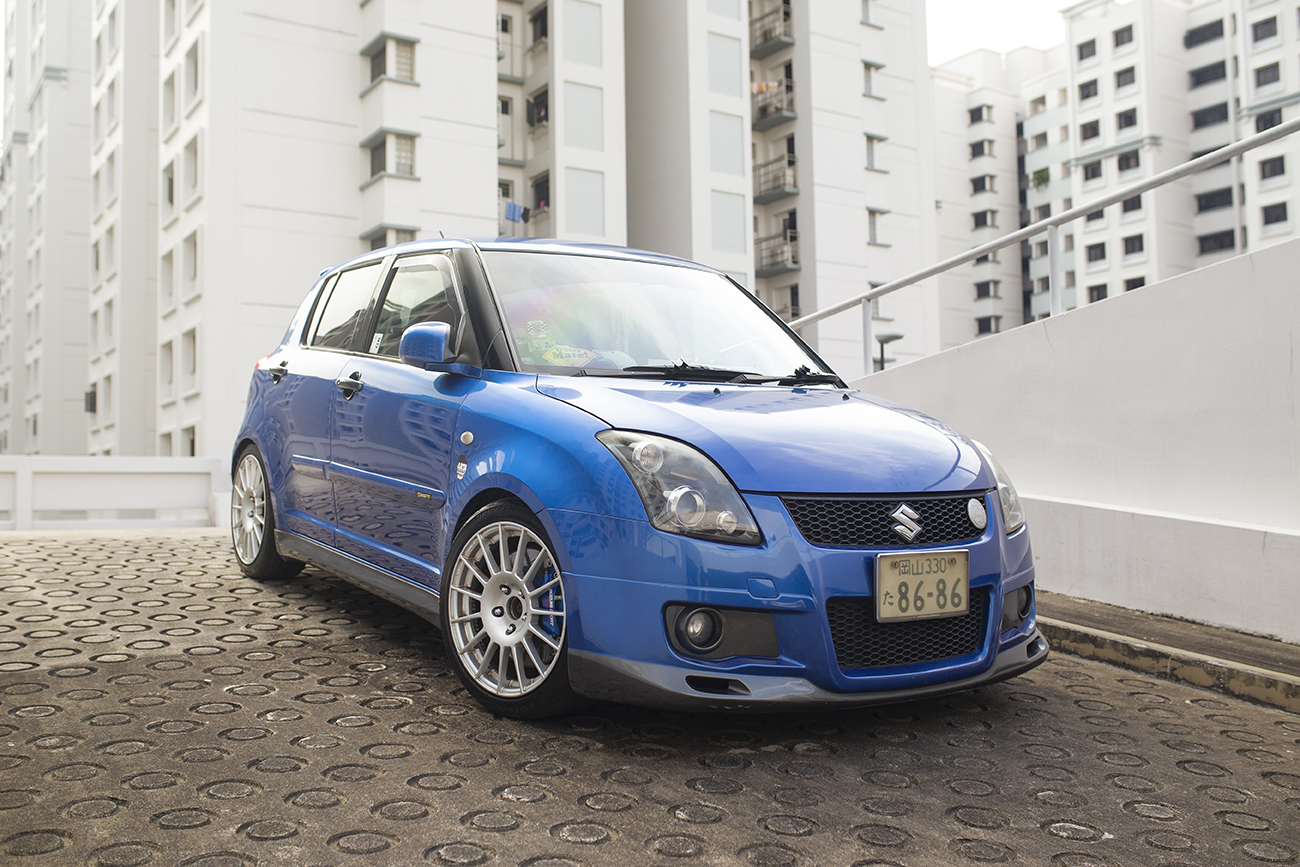 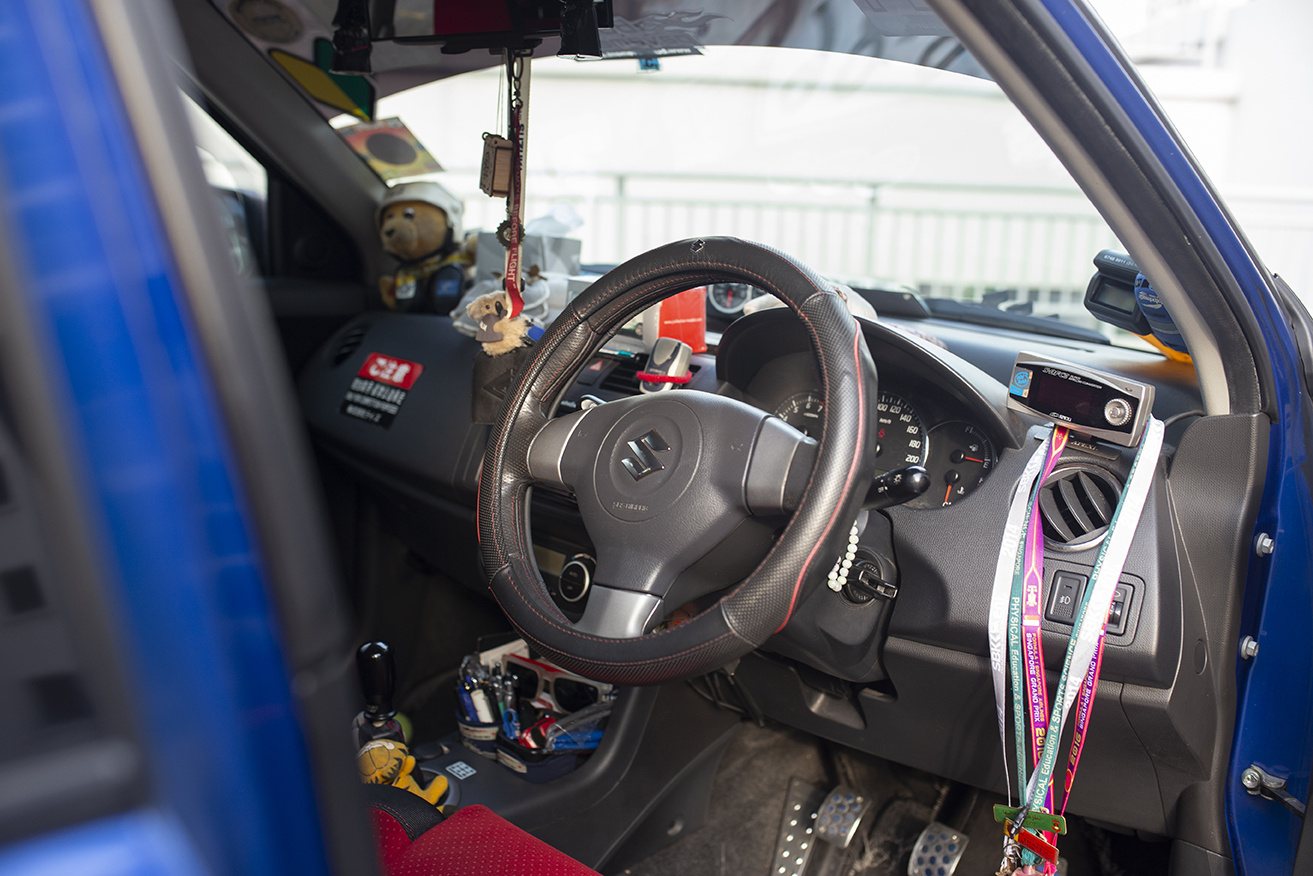 Taro is a second-generation Suzuki Swift Sport, colloquially known as the ‘ZC31S’ in reference to its chassis designation. A Japanese-specification unit, Taro is powered by a 1.6-litre ‘M16A’ high compression 4-cylinder engine mated to a 5-speed close-ratio manual transmission.

A set of silver Enkei RC-T4 wrapped in Bridgestone POTENZA Adrenalin RE003.

A set of silver Enkei RC-T4 wrapped in Bridgestone POTENZA Adrenalin RE003.

Azlan holds the belief that less is more, thus he’s opted to personalise his car with several subtle and tasteful modifications – beginning with a new set of wheels. Gone are the factory-fitted wheels, and in its place are a set of silver Enkei RC-T4 an inch larger, wrapped in Bridgestone POTENZA Adrenalin RE003 tyres in the 205/45 R17 size.

"RELIABLE ON BOTH DRY AND WET TARMAC ON A DAILY BASIS"

As a sensible father of two children that appreciate a comfortable ride, yet being a car enthusiast that relishes in spirited driving, Azlan loves how his POTENZA are able to serve dual purpose. “They’re exactly how my fellow Swift mates described them to be; reliable on both dry and wet tarmac on a daily basis, yet good enough for occasional spirited driving. Considering the amount of mileage travelled, I love their silent ride too!” 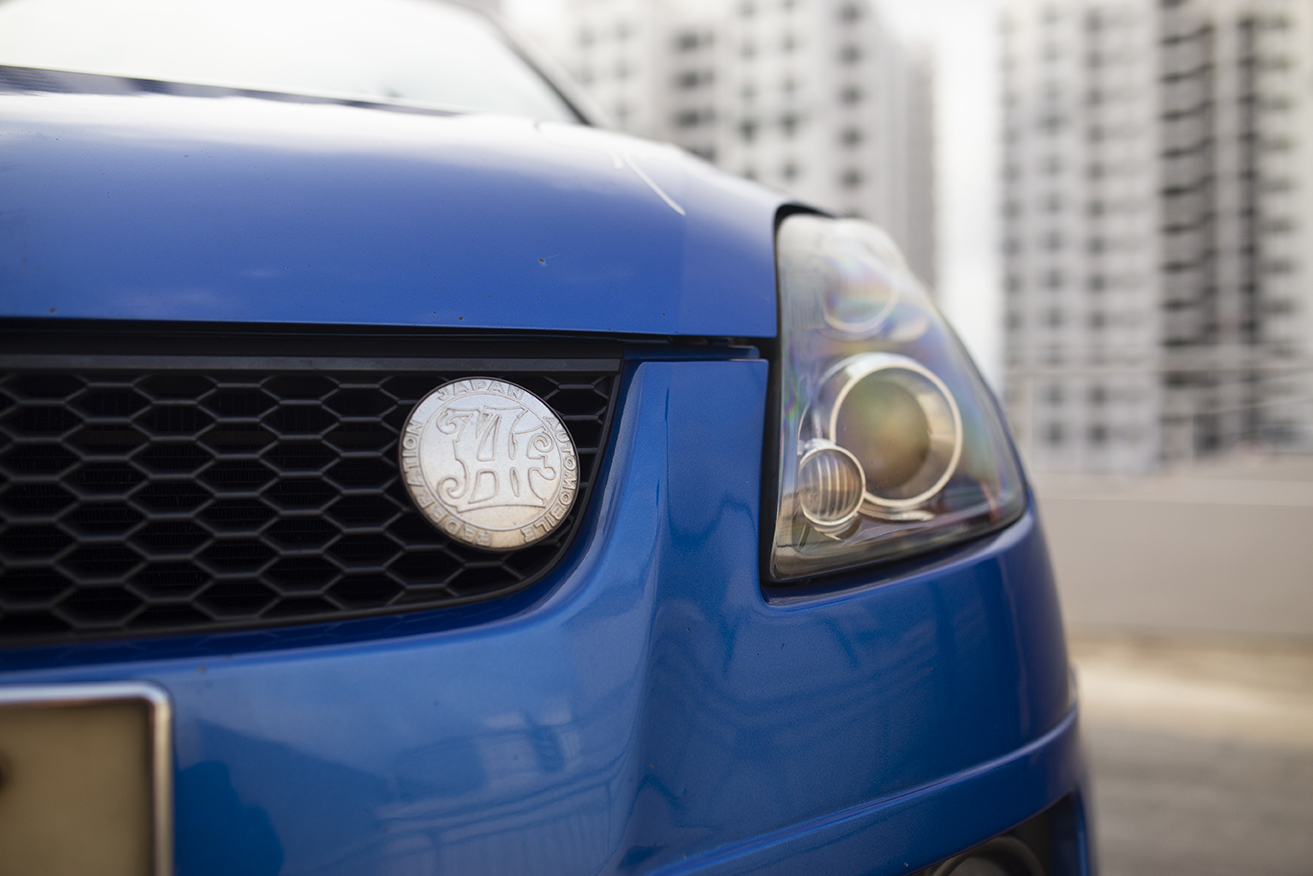 Azlan’s Taro holds many surprises, as we gradually find out during the interview about the car. It begins with the purchase process, which was personally handled by Azlan from start to end. Unlike most consumers who would purchase their vehicle from an authorised dealer or a parallel importer, he personally sourced the car from a dealership in Japan and had it shipped to Singapore. 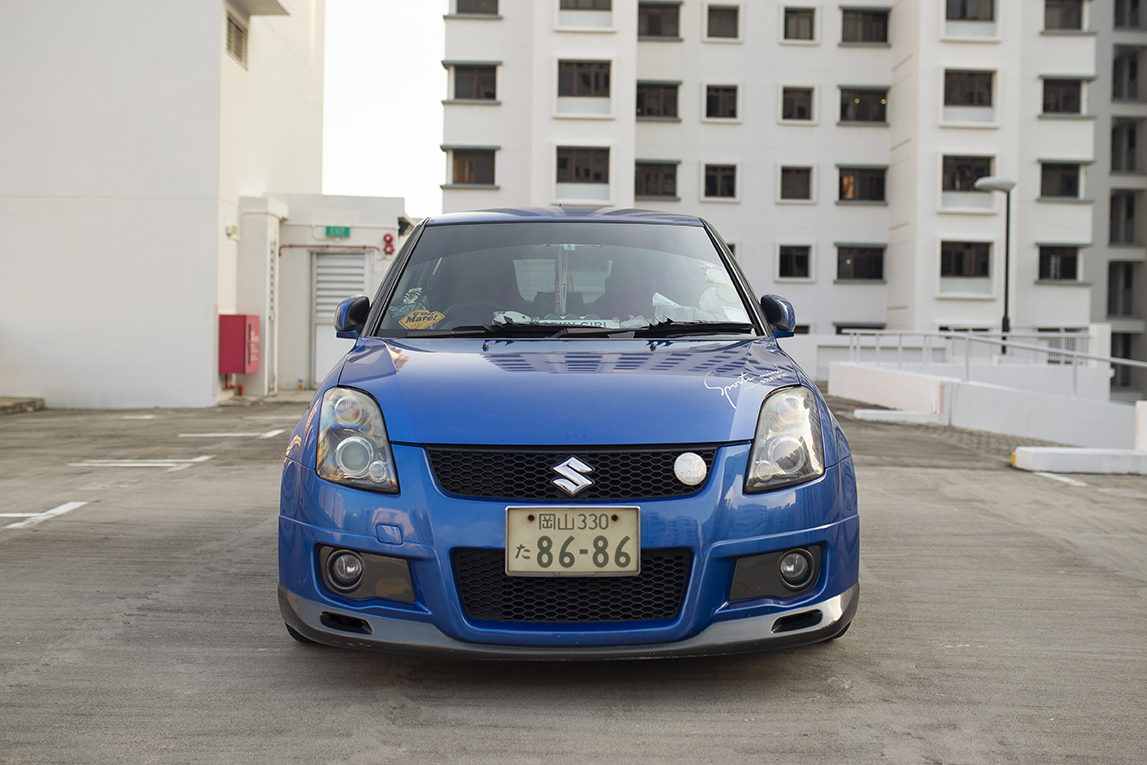 In fact, the Japanese license plate you see on the front of the car isn’t a mere cosmetic vanity plate – it was the actual registered license plate this very car wore while it still roamed the roads of Japan. Cosmetically, it is also rather similar to when it roamed Japanese roads, with a few understated changes that only the most discerning of Suzuki enthusiasts can detect. 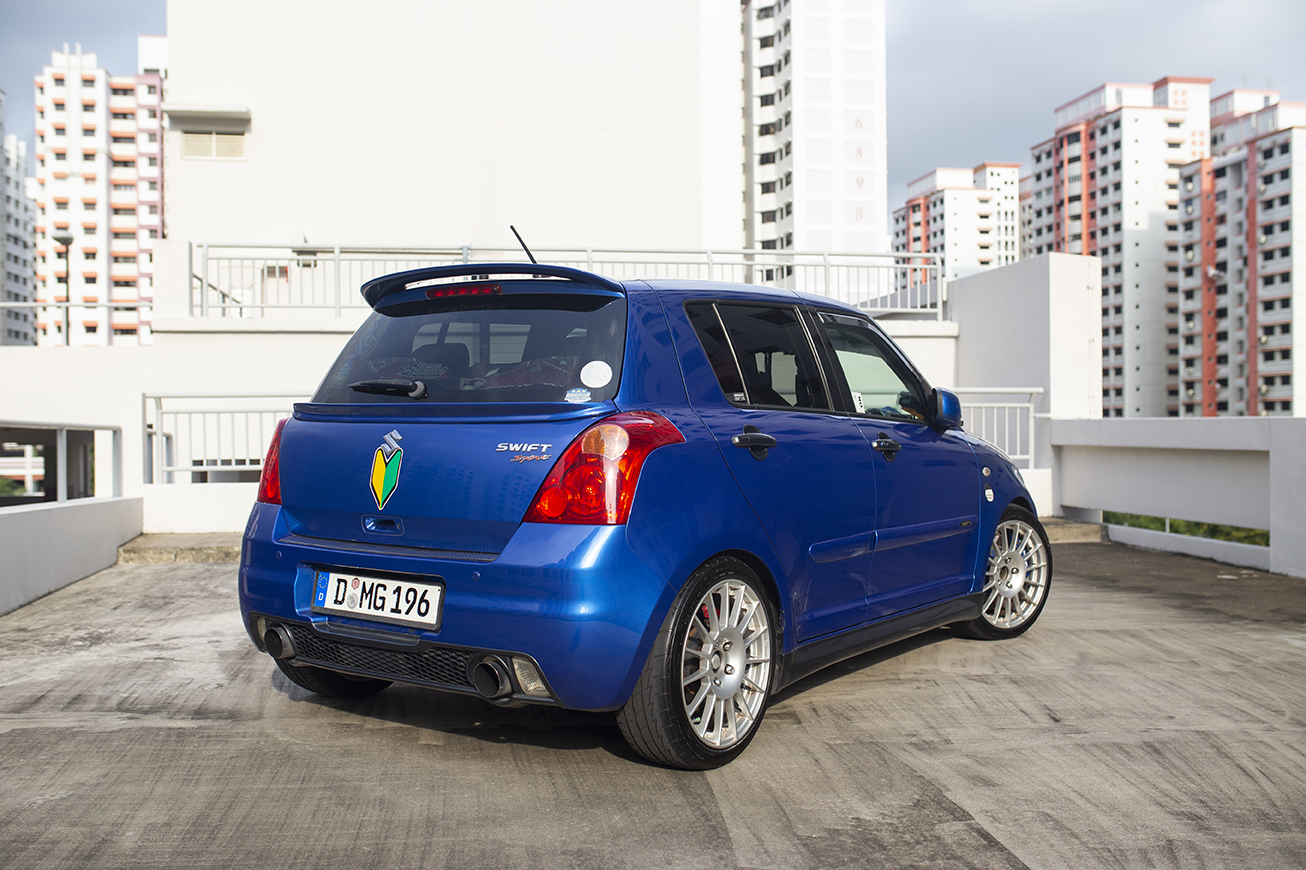 Taro’s front end has been undergone a mild refresh, with a Monster Sport bumper installed and painted to resemble the original part. Around the back, you’ll find two HKS parts – a HKS Kansai rear lip added to disrupt the Swift’s rounded rear end, and the original muffler swapped out for a HKS Legamax unit resulting in a fruitier exhaust note. 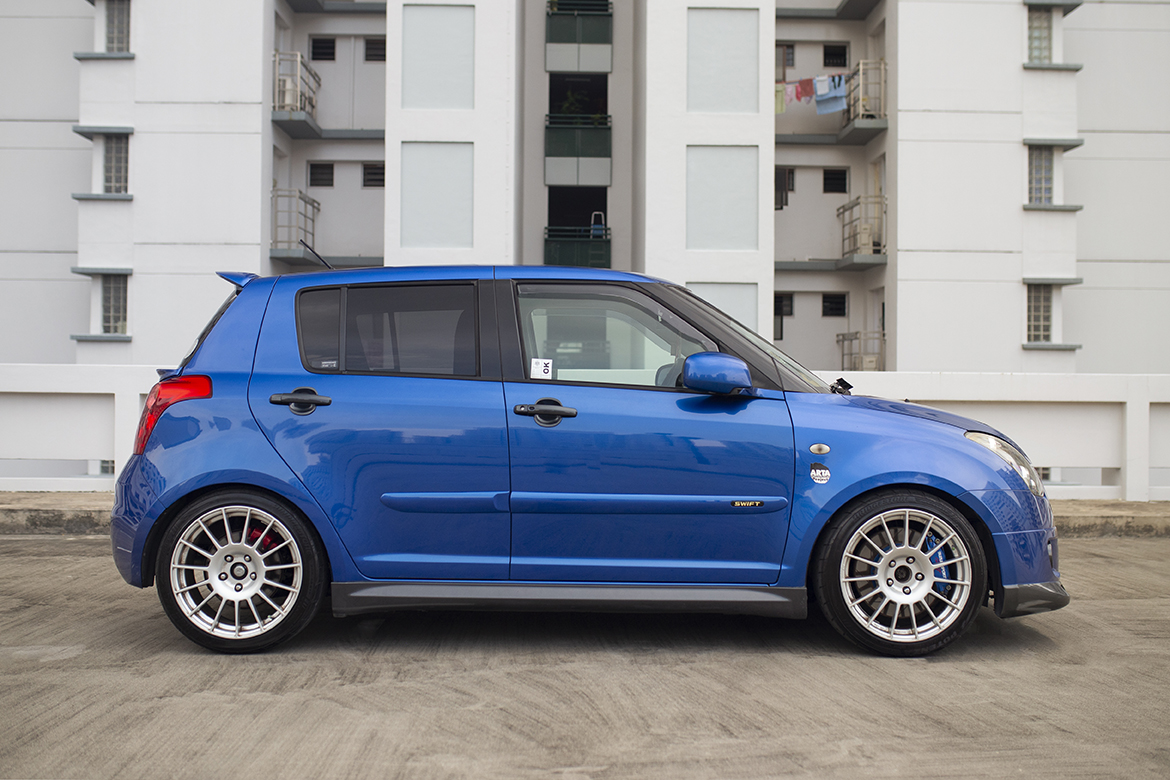 From the get-go, the Swift Sport was designed as a corner carver rather than a straight-line bruiser – thus several modifications were done to improve its handling prowess. Placing Taro slightly lower to the ground are a set of TEIN Flex Z coilovers, reducing the unsightly gap between the wheel and fender while improving cornering performance. 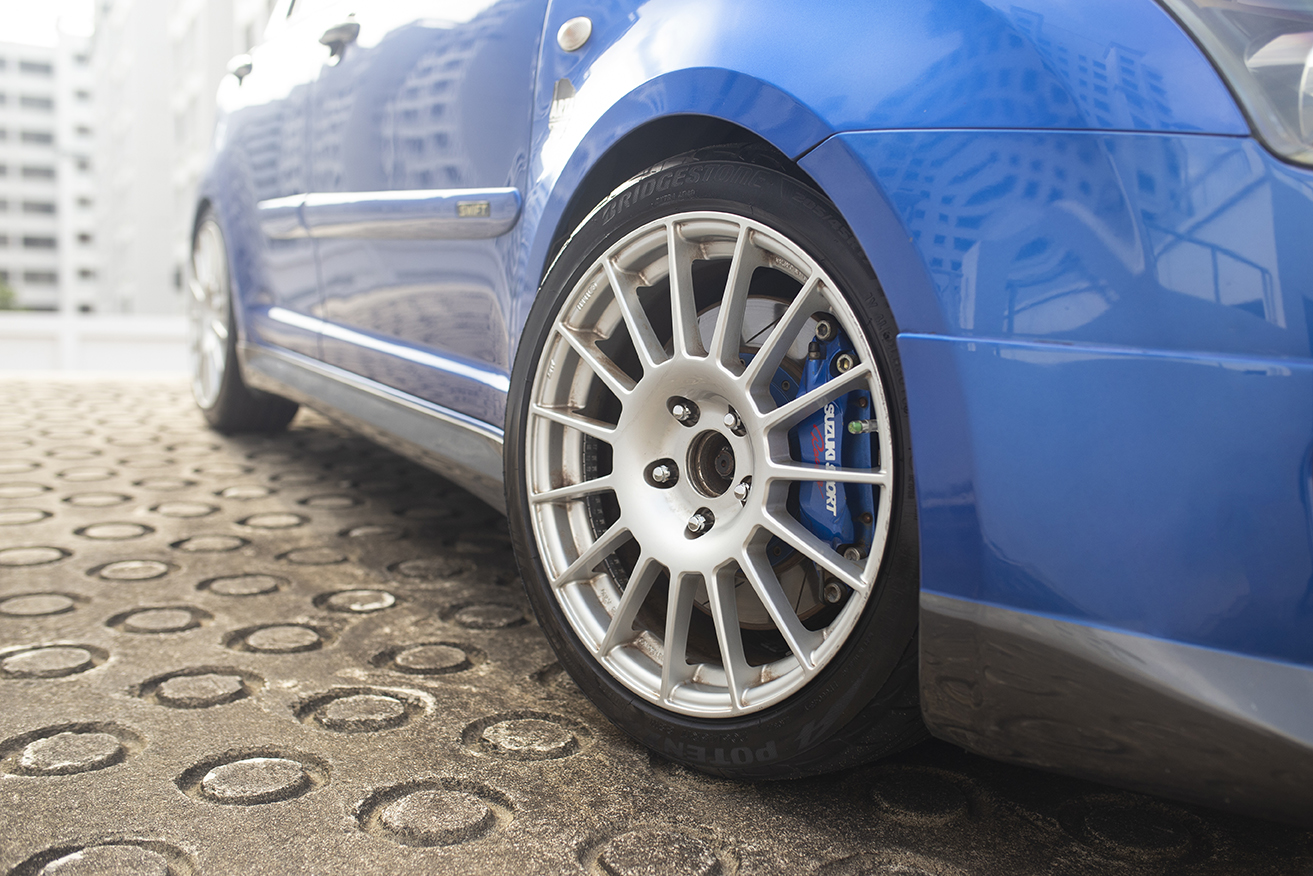 Helping Taro stop is an extremely rare set of Suzuki Sport 4-piston brake calipers that reside beneath the front wheels. Azlan shares that this brake kit was discovered by accident on a spontaneous visit to the nearby scrapyard, where the previous owner had no idea how desirable they were and sold them for scrap metal.

Having owned Taro for over 12 years now, Azlan has shared many happy memories in it with his two children. As someone that enjoys long drives, one notable trip for him was a direct dash to the Thai border under the darkness of night, engine humming along at a steady speed and both children fast asleep in the back seat.

MANY MORE KILOMETRES ON THE ODOMETER

With eight years left on Taro’s second COE, Azlan plans to continue enjoying the car as it is, putting many more kilometres on the odometer with regular road trips. 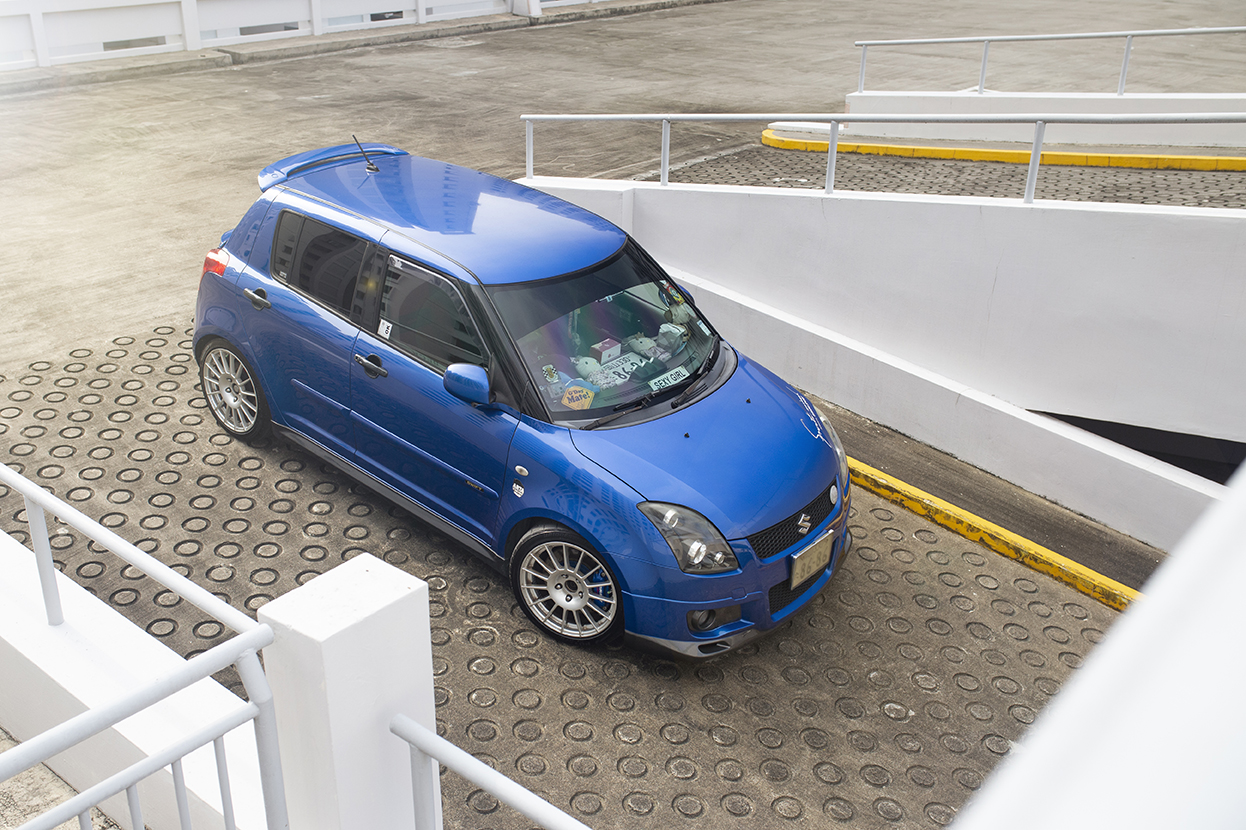