Clement chose the POTENZA S007A, Bridgestone’s ultra-high performance tyre, in the tyre size of 245/40 R18 for his Subaru WRX.

In an automotive world focusing more and more on efficiency and performance, the once-important factor of driver engagement seems to have taken a back seat.

Chances are, manual transmission won’t be with us much longer. It’s a dying breed that’s slowly being exterminated by technological advancements; further exacerbated by our desire to do things quicker, faster, and better.

In this edition of Owners’ Rides, we feature Clement and his manual-transmission Subaru WRX, fitted with our flagship POTENZA S007A (now superseded by POTENZA Sport) tyres. Contrary to the majority of motorists, Clement had actively sought out manual transmission car models during the search process. 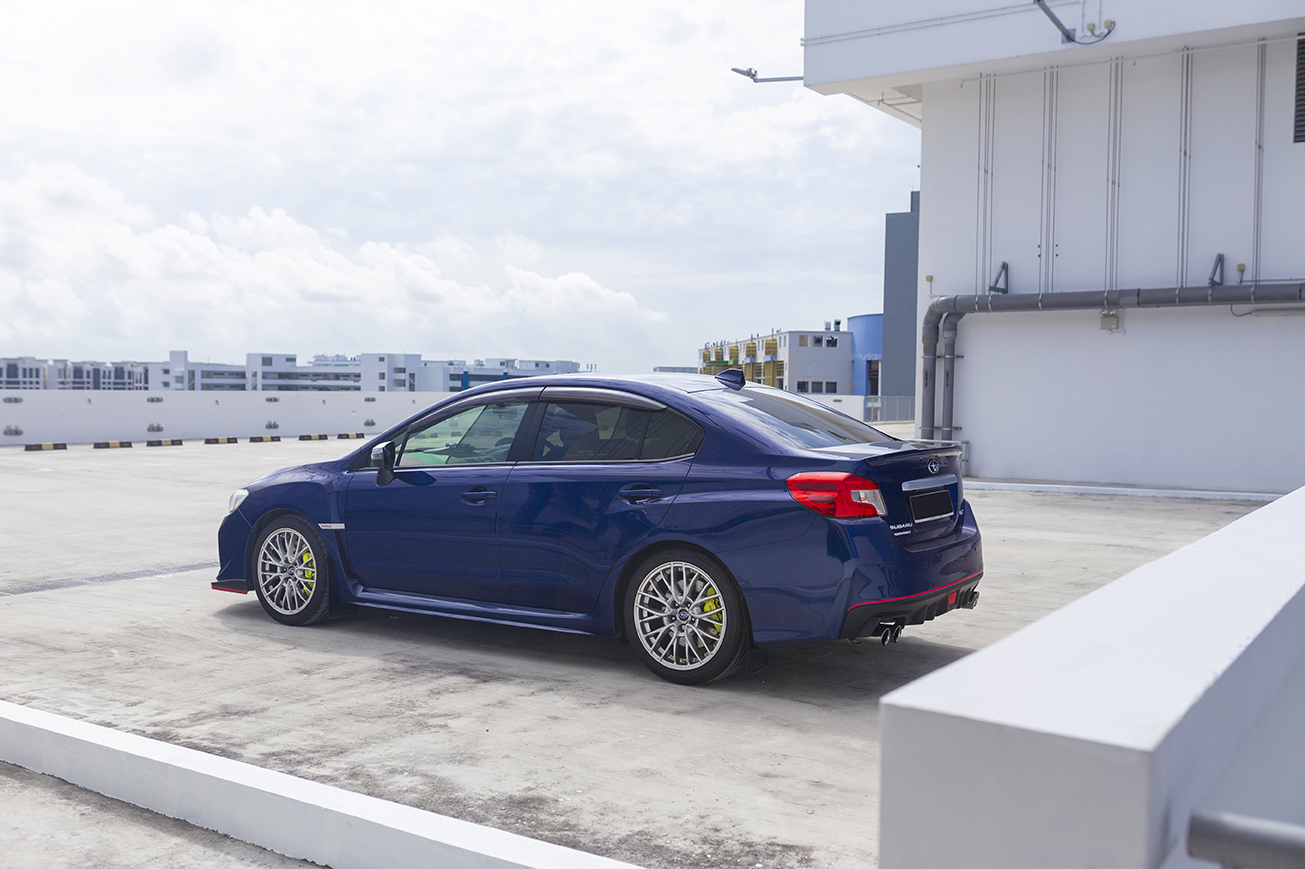 In late 2016, options for new cars that fit Clement’s requirements – 4 doors and a manual transmission – were limited to just two models. One being his Subaru WRX, and the other, the second-generation Suzuki Swift Sport. As Clement already owned a Suzuki Swift Sport, he decided to go for the Subaru WRX as an upgrade.

Clement’s Subaru WRX is a seventh generation ‘VA’ model, fitted with a variant of the ‘FA20’ engine originally developed for the Subaru BRZ. Now in direct-injected turbocharged guise, the 2.0-litre engine is mated to a 6-speed manual transmission.

To keep it simple, Clement has personalised his car by converting the exterior to mimic the Japan-only WRX S4 SporVita. The customisation started with a set of satin silver wheels, which keen-eyed readers might be able to identify as identical in design to those on the WRX STI.

Having tried other European tyre brands, Clement was intent on switching to Bridgestone tyres as his choice of ultra-high performance tyres. The new, Europe-developed POTENZA Sport was receiving glowing reviews from testers overseas, and he was eager to try them out.

Due to premature tyre wear, Clement instead went in search for a set of POTENZA Adrenalin RE004 as the POTENZA Sport had not yet been launched at the time. As luck would have it, Bridgestone authorised dealer Stamford Tyres had a set of POTENZA S007A in the 245/40R18 size going for a good deal.

“The POTENZA S007A has met and exceeded my expectations for a performance tyre. They complement the setup of the WRX very well, with sidewalls of the right stiffness – not soft to the extent where handling is compromised, and not hard to the extent where they get uncomfortable.”

Engagement and feel are things that rank highly for Clement in a car. When looking out for his first car in 2013, he opted for a Suzuki Swift Sport – which offered a powerful, high-compression engine and a 5-speed manual transmission. As a first car, it was perfect; light on fuel, sufficiently peppy, and nimble around corners.

lost in agility is made up for in space and comfort

Trading up to the WRX was a whole different experience. Compared to the Swift Sport, it weighed 1.5 times as much, but offered more than twice the power output. However, what is lost in agility is made up for in space and comfort. 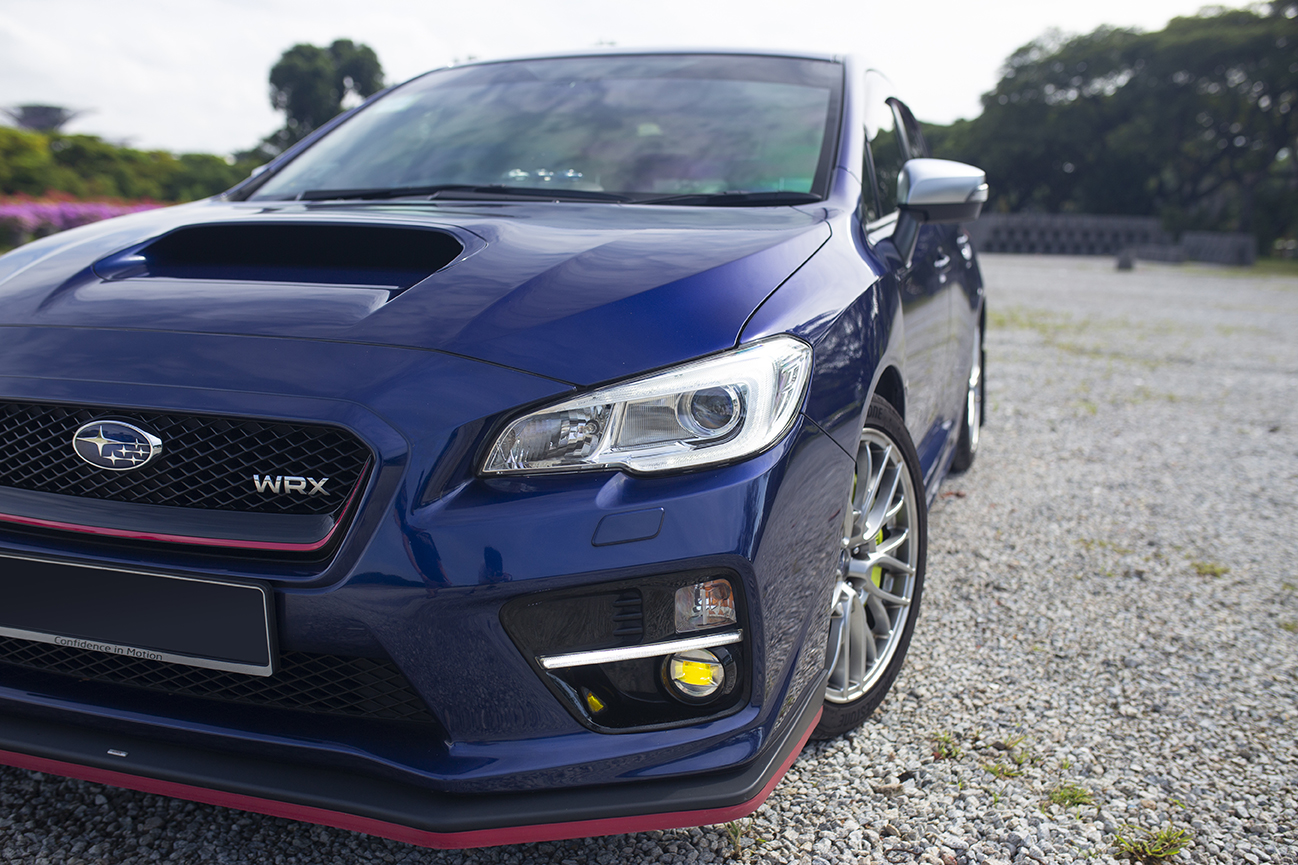 In fact, ‘fast’, ‘safe’ and ‘comfortable’ are three words Clement uses to describe his car. The first two words comes as no surprise considering the car’s 264 bhp power output. However, the third does raise some eyebrows, given the WRX’s rally racing pedigree.

Though the WRX may no longer be the hardcore, sharp-edged rally machine it once was, it is perfect for daily driver duties, bringing Clement to work and back. He’s thus placed his focus on customising its looks in an ‘OEM Plus’ style, using parts from Japanese-market Subaru models. 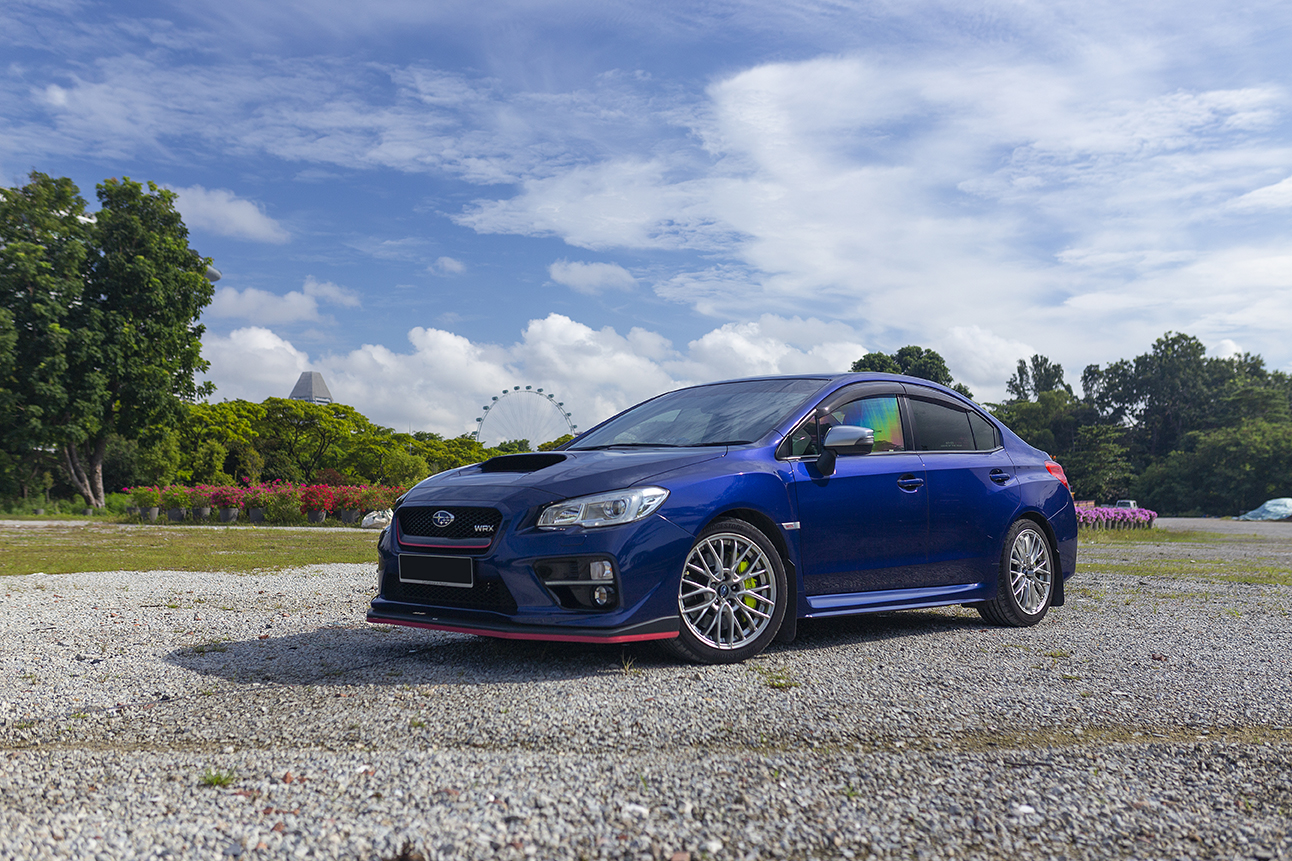 When modifying the WRX, the luxury-oriented WRX S4 SporVita was Clement’s primary inspiration. To replicate the look, a pair of satin silver wing mirror caps have been added. For a sportier stance, he’s also added an original STI front lip and lip skirt.

Finished in an eye-catching shade of cherry red, the lip skirt is complemented by Clement’s favourite modification – the front grille. Although nearly identical to the factory item, this front grille adorned with a cherry red stripe is available only on two models, the WRX S4 and limited-run WRX STI S207. Impossible to purchase brand new even from Subaru Japan, Clement spent months waiting for a near-new piece to appear for sale. 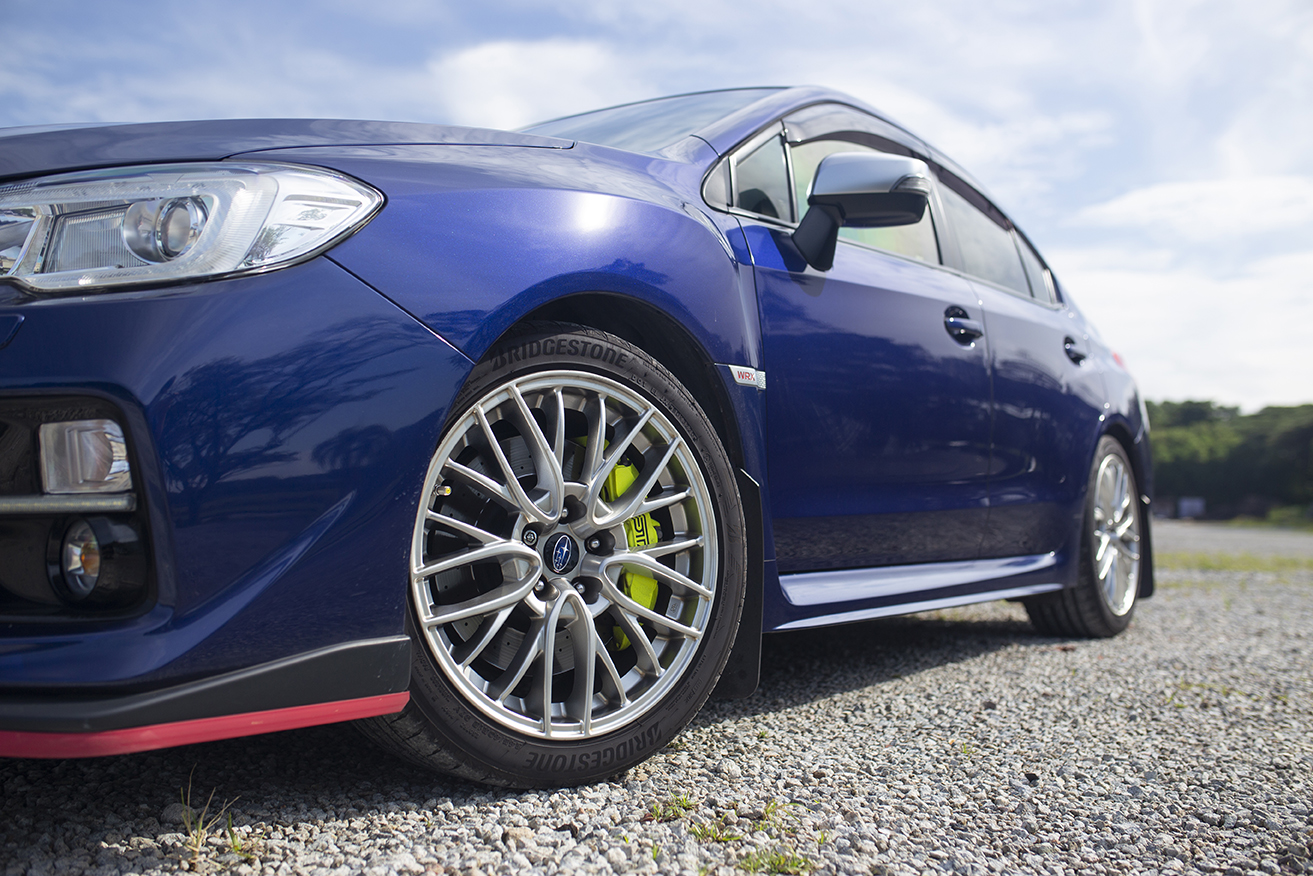 Chassis modifications have been limited only to a set of uprated brakes from the WRX STI. This neon yellow brake kit improves braking performance and visual appeal, with a larger 6-piston front and 2-piston rear setup. However, on its way from Japan, is an original Bilstein suspension setup from the WRX S4 which Clement reports should lower the car by 7 millimetres.

admin and pioneer member of the SG-VA

As an admin and pioneer member of the Singapore VA WRX Owners Group (SG-VA), Clement has had countless memorable experiences with his car. This included a 20-WRX convoy drive up to Penang, Malaysia, before the pandemic hit. It’s not just passion, but also camaraderie that keeps the flame for the WRX burning. 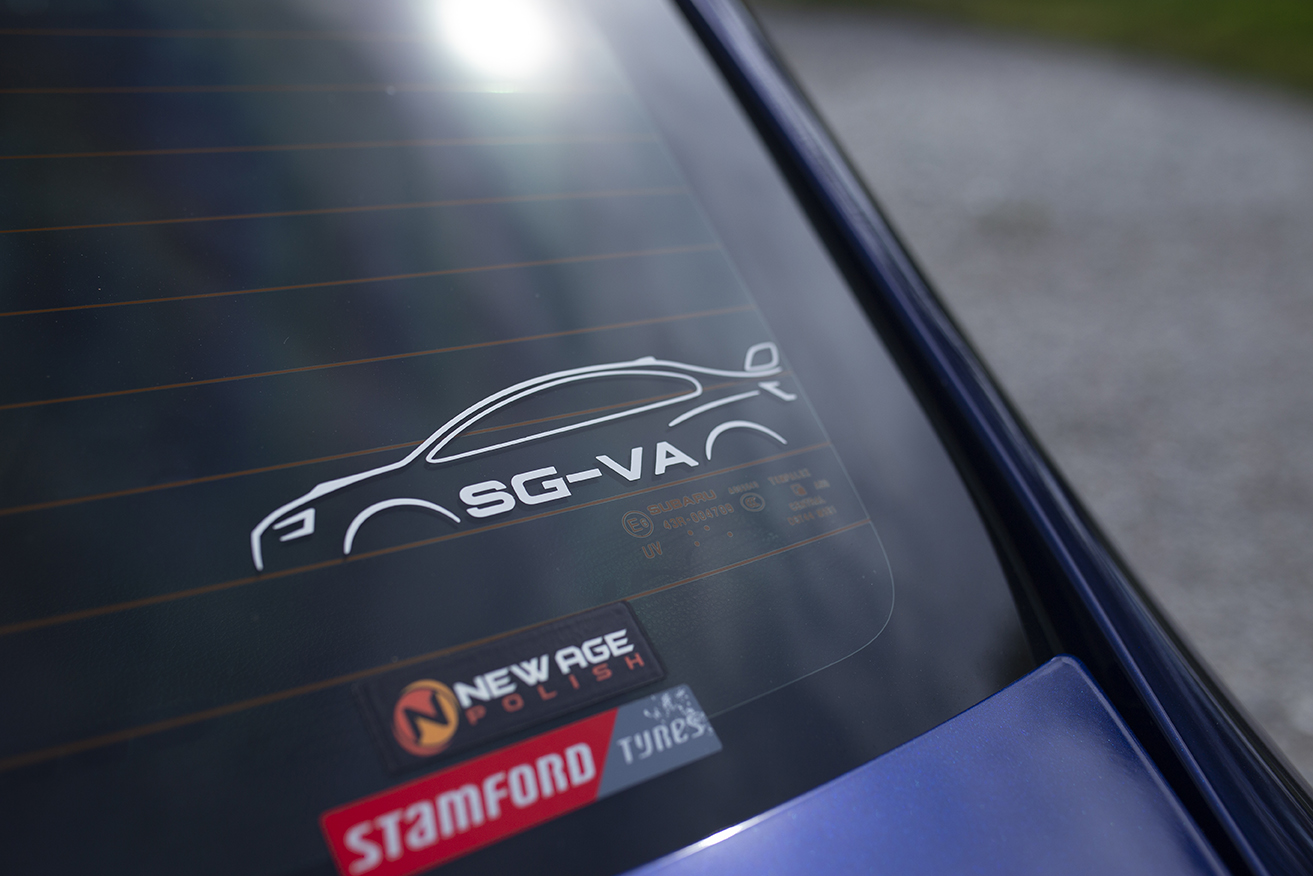 "Dealer was communicative. Promptly informed about stock availability and when tyres arrived at the shop."

This family-friendly 7-seater, on POTENZA S007A, is an all-weather family shuttle with a touch of performance.