Heather chose the POTENZA Adrenalin RE004, Bridgestone’s street performance tyre, in the 205/50 R16 size for her Subaru Impreza WRX.

Have a discussion with anyone about rally racing, and several legendary names will inevitably pop up. Carlos Sainz, known for his time with various Toyota Celicas; Tommi Makinen, known for his list of victories in several generations of the Mitsubishi Lancer Evolution; and Colin McRae, who made his mark with the Subaru World Rally Team.

McRae, the Scottish rally driver known for being young and gutsy, had an aggressive driving style which made him one of the most exciting rally drivers in the world to watch. His World Rally Championship (WRC) debut was in 1993 with the Subaru World Rally Team, driving a then-aging Subaru Legacy RS shortly before it was due to be retired in favour of the new Impreza. 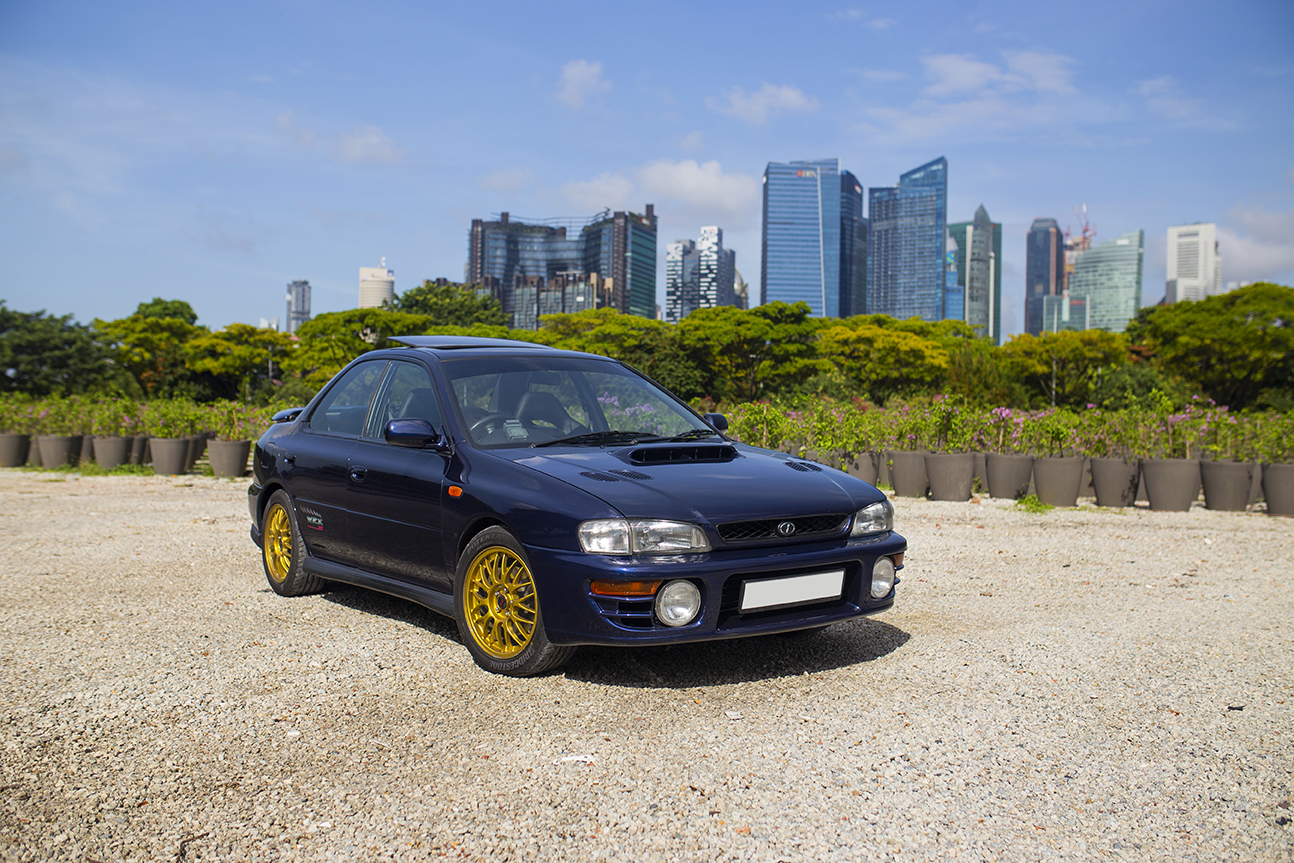 In 1995, McRae took his sole WRC win in the new Subaru Impreza, at the age of just 27. That win cemented his inseverable connection to the marque, and the distinctive blue and yellow ‘555’ colour scheme. Till this day, McRae still holds the title of being the youngest-ever to win the WRC Drivers' title.

With the rally victory, the then-new Subaru Impreza cemented its position as a cult classic.  With a turbocharged engine and all-wheel drive, it was one of the fastest and most entertaining cars to drive in the real world, and a great way for the average Joe to live out their rally driver fantasies. 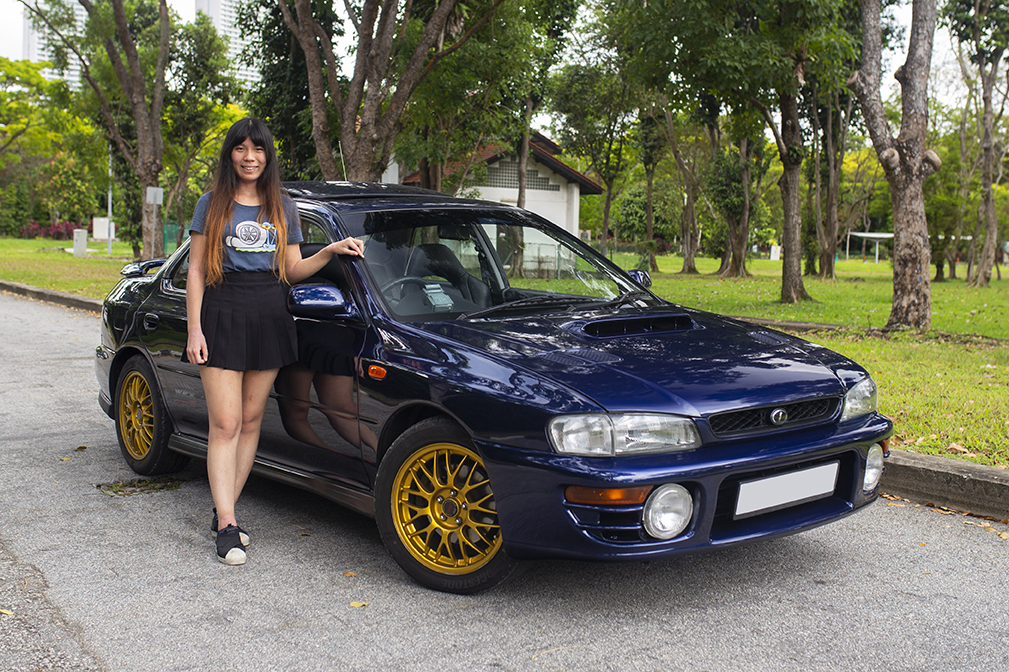 This Subaru Impreza WRX here belongs to Heather, who you might remember from our previous OwnersRides feature. An Impreza WRX owner ever since she got her driving license, Heather’s friend recently brought this mint-condition unit to her attention. Upon finding out that it was manufactured in her birth year, she knew she had to have it.

Heather’s Subaru Impreza WRX is the first-generation of the Impreza WRX, a 4-door example of the ‘GC8’ chassis. It’s powered by a 2.0-litre turbocharged ‘EJ20’ engine mated to a 5-speed manual transmission; putting out 280 bhp through its all-wheel drive system in the case of this 1997 example. 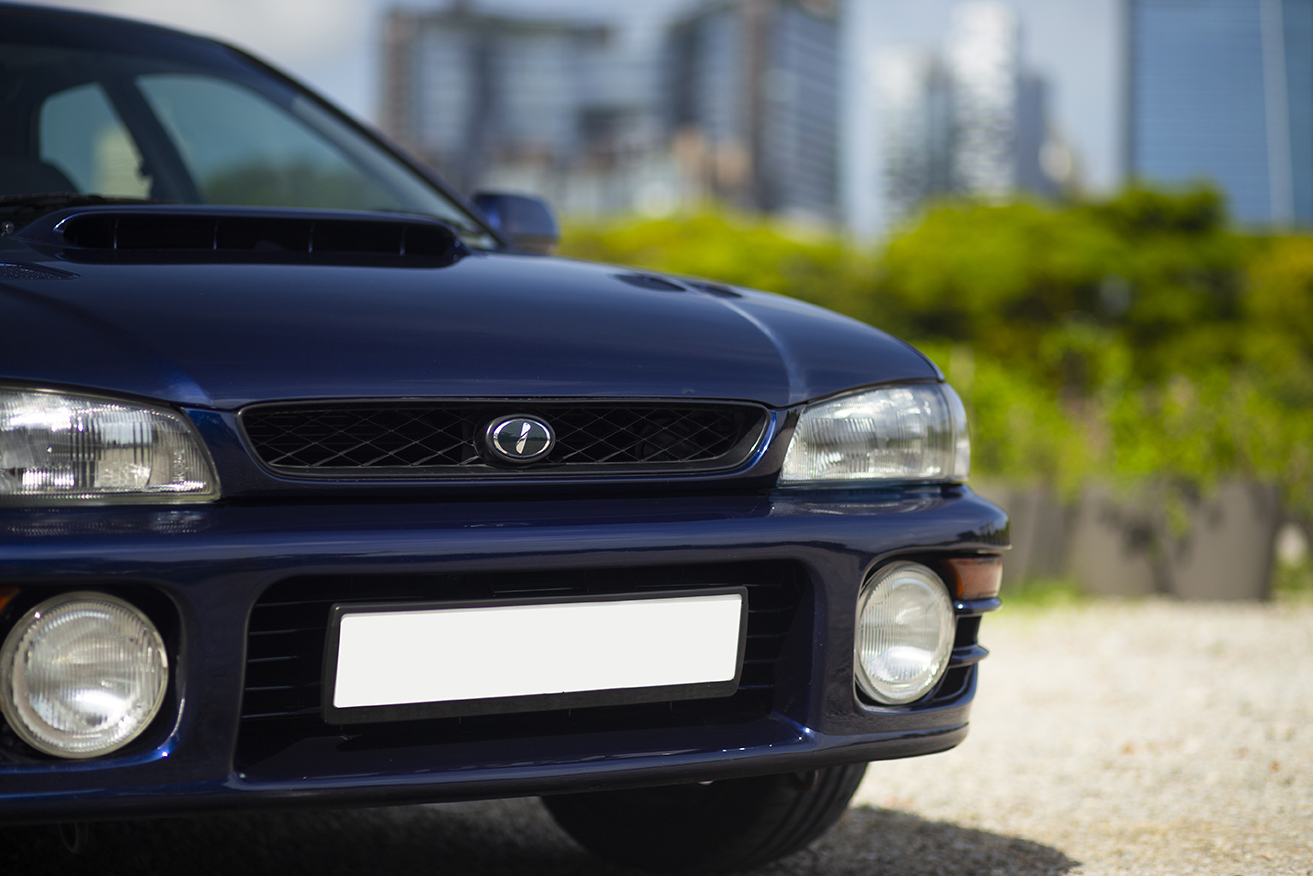 Having purchased this car less than half a year ago, Heather is first addressing all the age-related issues to get the car to a level she’d like. Her goal is to keep it as original as it has been for the past 23 years, with small modifications to enhance the driving experience. 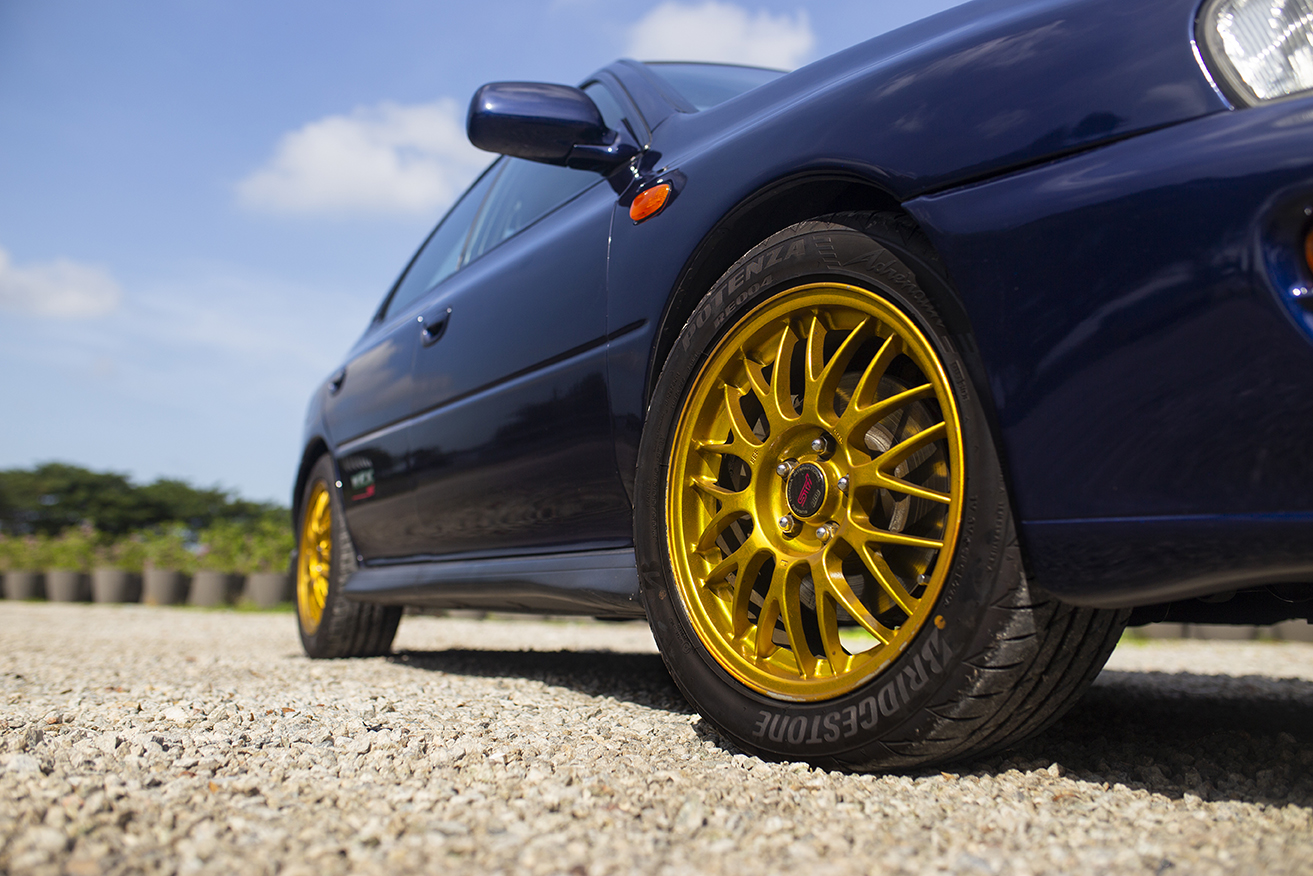 Wrapped around the original (and very rare!) forged STI BBS wheels are a set of POTENZA Adrenalin RE004 in the 205/50 R16 size. No stranger to the POTENZA Adrenalin range, Heather chose these tyres for their stiff sidewalls and all-weather performance capabilities.


“The RE004 has a much stiffer sidewall (compared to other tyres). The moment I put these tyres on, there was such a responsive and nice steering feel - the turn-in was so good!”


Despite its performance capabilities, the WRX had been well-looked after and gently driven by its first, senior owner for its first 20 years. However, with some care (and new tyres), you can teach an old dog new tricks. Going on spirited drives and taking corners at high speed, Heather reports that the combination of POTENZAs and the WRX’s all-wheel drive system still instil large amounts of confidence.

Although she’s only owned the car for a short period of time, Heather loves how each drive is a new and memorable experience for her. No matter where she went, the WRX seemed to draw the attention of everyone around – whether it was the younger crowd who recognised the car from motorsports and the Initial D manga, or the older folks who once owned it new in the 1990s.

a mini history lesson of the car

One of these encounters happened while visiting her workshop, where an elderly gentleman was also getting work done to his WRX. As luck would have it, he recognised the original license plate – it turned out that he was friends with the previous owner, and was able to conduct a mini history lesson of the car there and then. 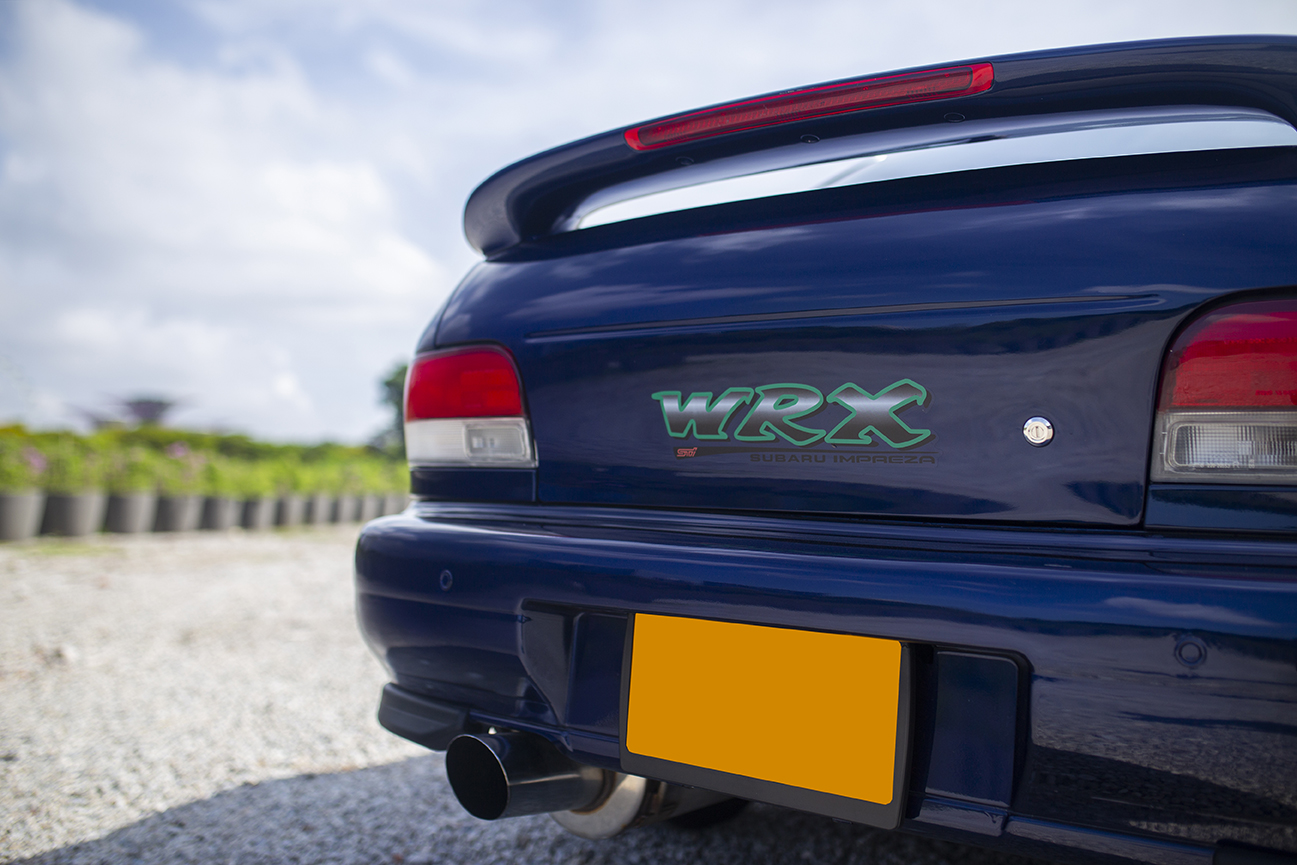 Other amusing reactions to date include that of shock and surprise, especially when people find out that (a) the owner is the same age as the car, and (b) Heather had sold a newer version of the same car for an older one. But in its astonishingly original condition and with a ridiculously low mileage of just 79,440km covered in 23 years, this was an once-in-a-lifetime opportunity for her.

Purchasing the GC8 was a longtime dream come true for Heather, and the registration year matching her birth year was just icing on the cake. The GC8 Impreza WRX ticks all the boxes – an aggressive Boxer engine rumble, a raw and unfiltered driving experience, and one item checked off the bucket list.

For Heather, driving – and by extension, her car – has been a big part of her life in the past 6 years since getting her license. Through ups and downs in her life, going for a drive has been the infallible way to send her mood soaring. Driving for her is 90% emotional and 10% practical; and happily, she’s now found the perfect partner for the journey ahead. 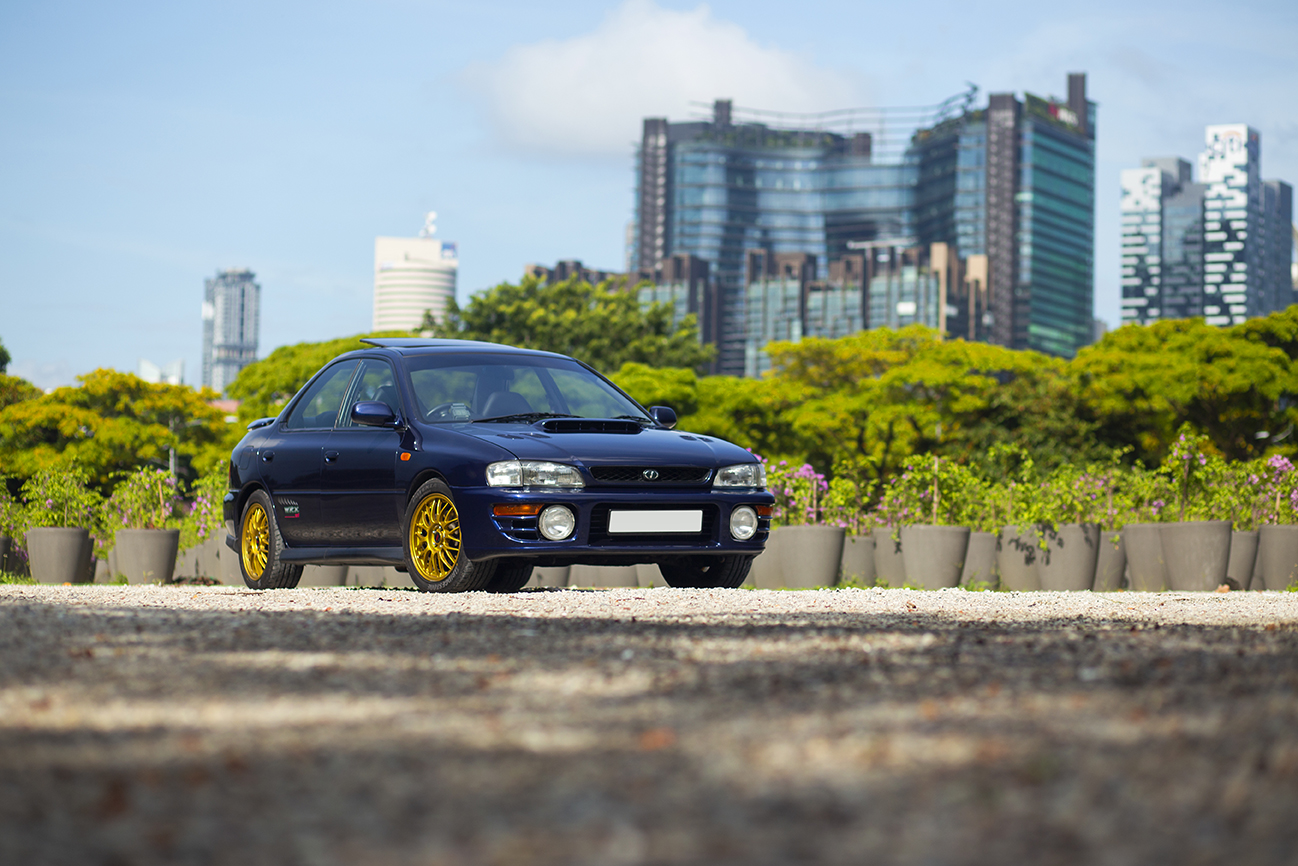 "Friendly and helpful, had a nice air-con lounge to wait in while my tyres were being changed. Great value on tyres."