This compact executive sedan, on POTENZA Adrenalin RE004, is a motoring enthusiast’s ideal family ride.

Engagement and Luxury - John’s Lexus IS250

John chose the POTENZA Adrenalin RE004, Bridgestone high performance tyre, in 235/40R18 size for his Lexus IS250.

Car enthusiasts resent it, but the hard truth of the reality is that global emissions standards have led to the demise of large displacement engines in cars.

Automakers worldwide are continuously exploring ways to downsize displacement and reduce emissions from their engines. The Volkswagen Group, for example, has used their 1.0-litre engine in small hatchbacks like the Volkswagen Golf and Seat Ibiza.

Similarly, Ford uses a 1.0-litre EcoBoost engine in their Fiesta and Focus hatchbacks. Back in 2012 when the engine was set to be unveiled, Ford engineers famously brought the engine on a flight as carry-on luggage. Fitted snugly in a suitcase, the small – both in displacement and physical size – engine accompanied engineers on a flight from their headquarters in Detroit to the Los Angeles Auto Show. 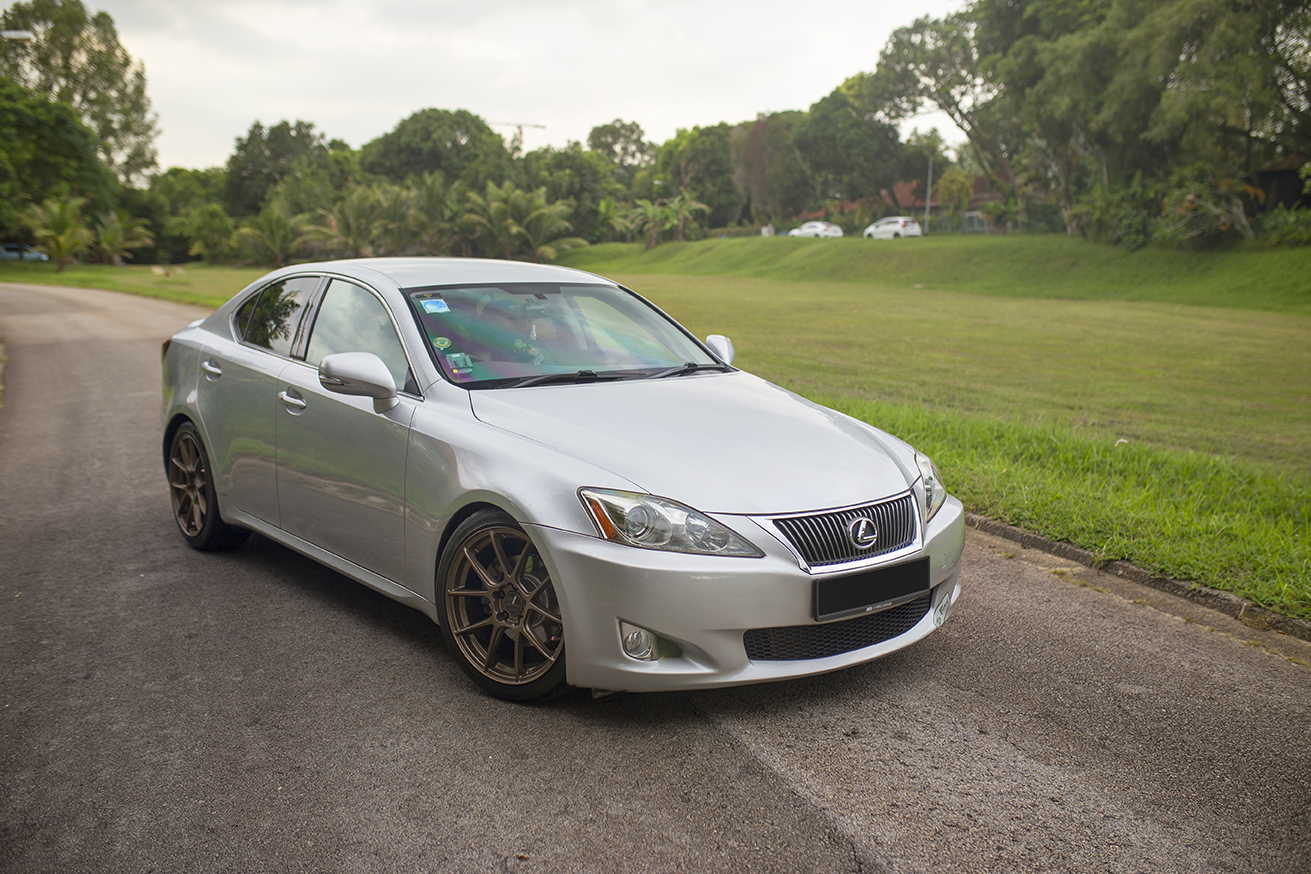 Unlike the European manufacturers, Japanese manufacturer Lexus wasn’t quite in a hurry to downsize their engines. As a brand who prides itself on smoothness and quietness, turbocharged 4-cylinder engines were deemed too crude to replace the existing 2.5-litre V6 engine.

It wasn’t until 2015 – several years after the European contemporaries – that a suitable turbocharged 2.0-litre engine was introduced. Despite the new engine being lauded for its smoothness, traditional Lexus owners still pined for the six-cylinders of yore. 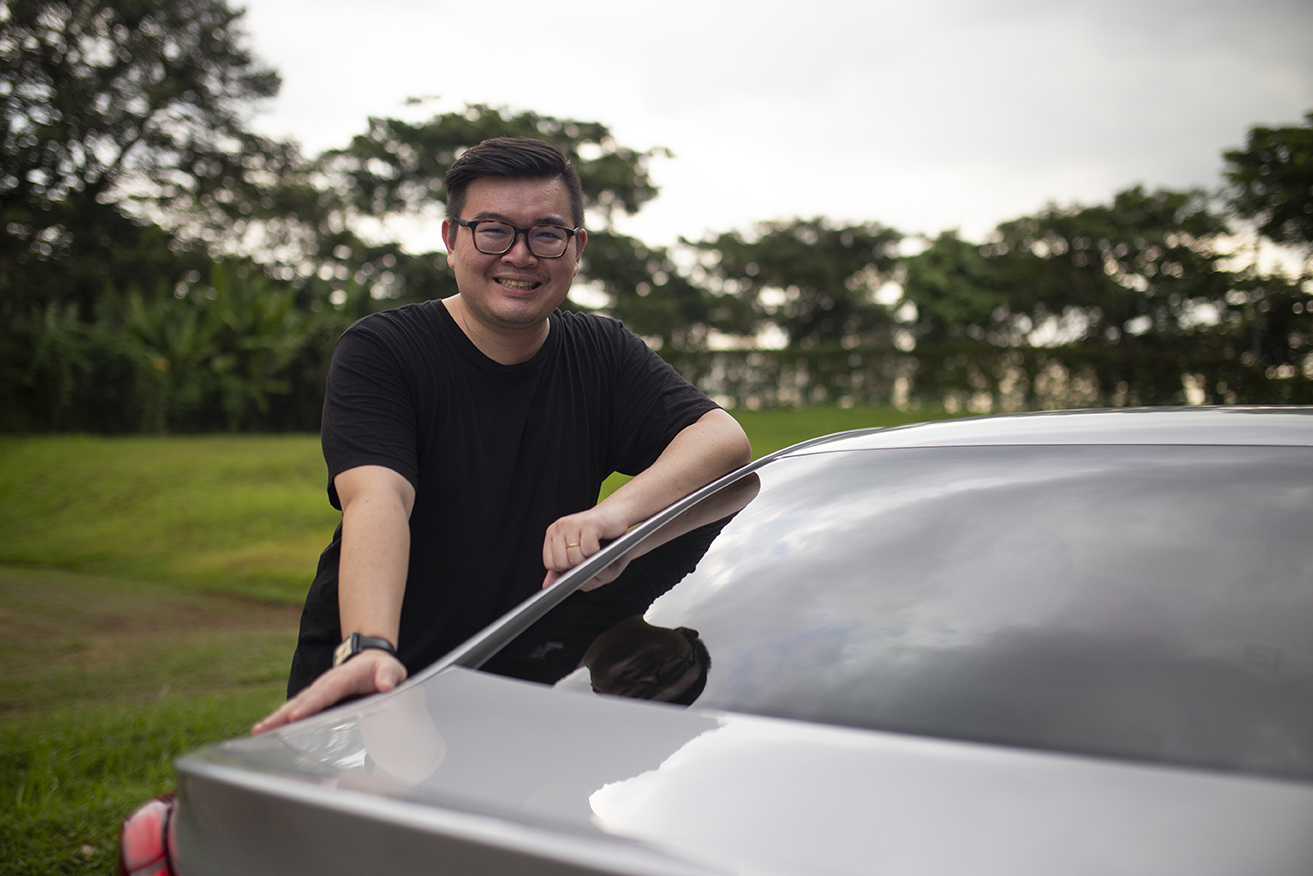 John, the owner of this Lexus IS250, shares the same sentiment. In search of a comfortable riding experience that offered decent driving dynamics such as large engine and a rear-wheel drive layout, the IS250 stood out as the ideal family car. John, being a young achiever under 30, not only does he seek for a prestigious car brand, but also an engaging experience on his daily drive. 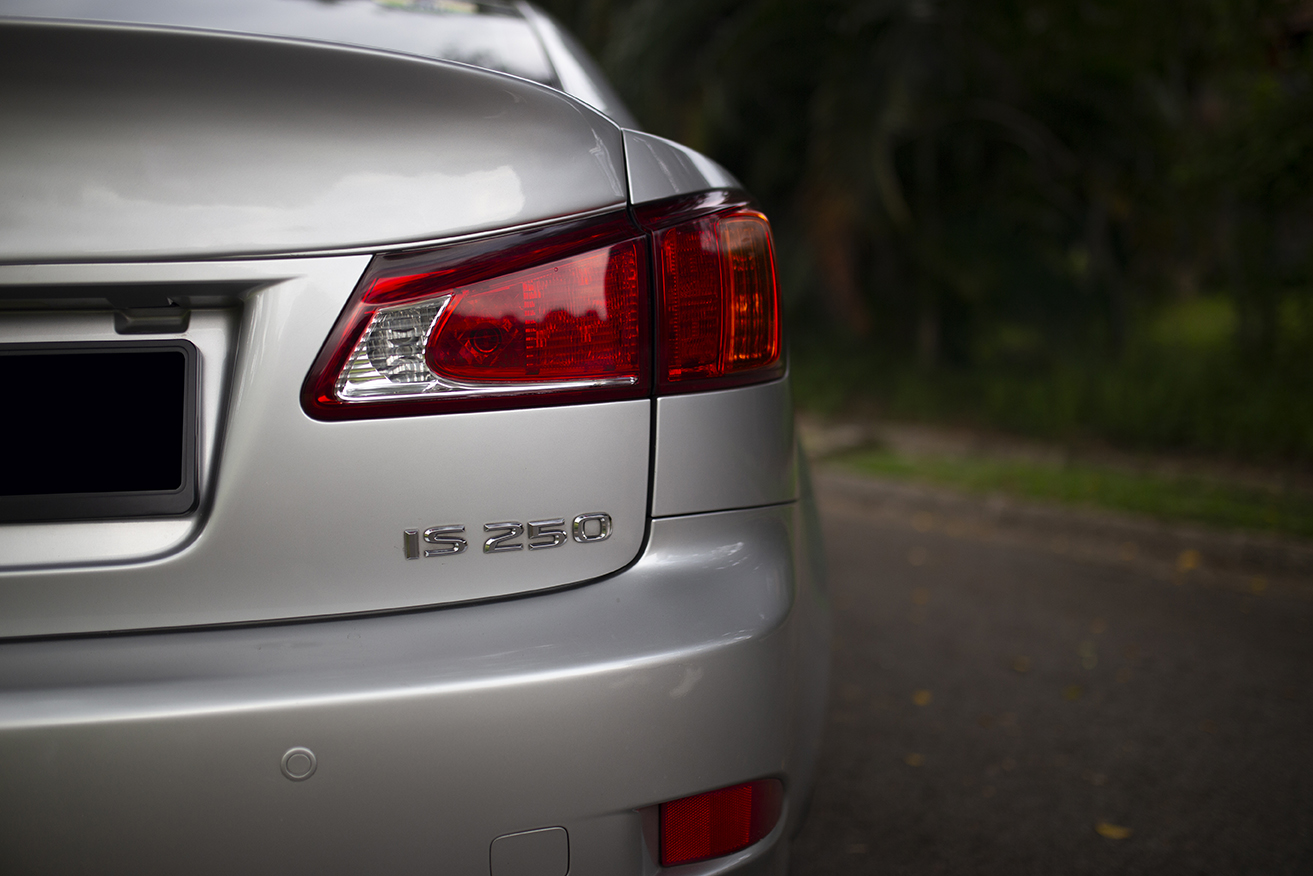 John’s Lexus IS250 is a second-generation ‘GSE20’ model. This means a classic front-engine, rear-wheel drive layout, with a 2.5-litre naturally aspirated V6 engine and 6-speed automatic transmission. Designed as a sleeker replacement of the first-generation IS, this model offers an extremely low drag coefficient of just 0.28!

While the driving experience of the IS250 meets John’s expectations, the factory-fitted 17-inch wheels did not quite cut it in the aesthetics department. A set of 18-inch Enkei USA TS-V wheels were then sourced, from Japanese wheel manufacturer Enkei’s American subsidiary.

Having great experiences with the POTENZA Adrenalin range on his previous cars, John quips that getting a new set of POTENZA Adrenalin RE004 in the 235/40R18 size was “one of the most natural things to do”. Fitted by Bridgestone authorised e-tailer AutoApp, John’s new tyres were installed professionally using their concierge service. 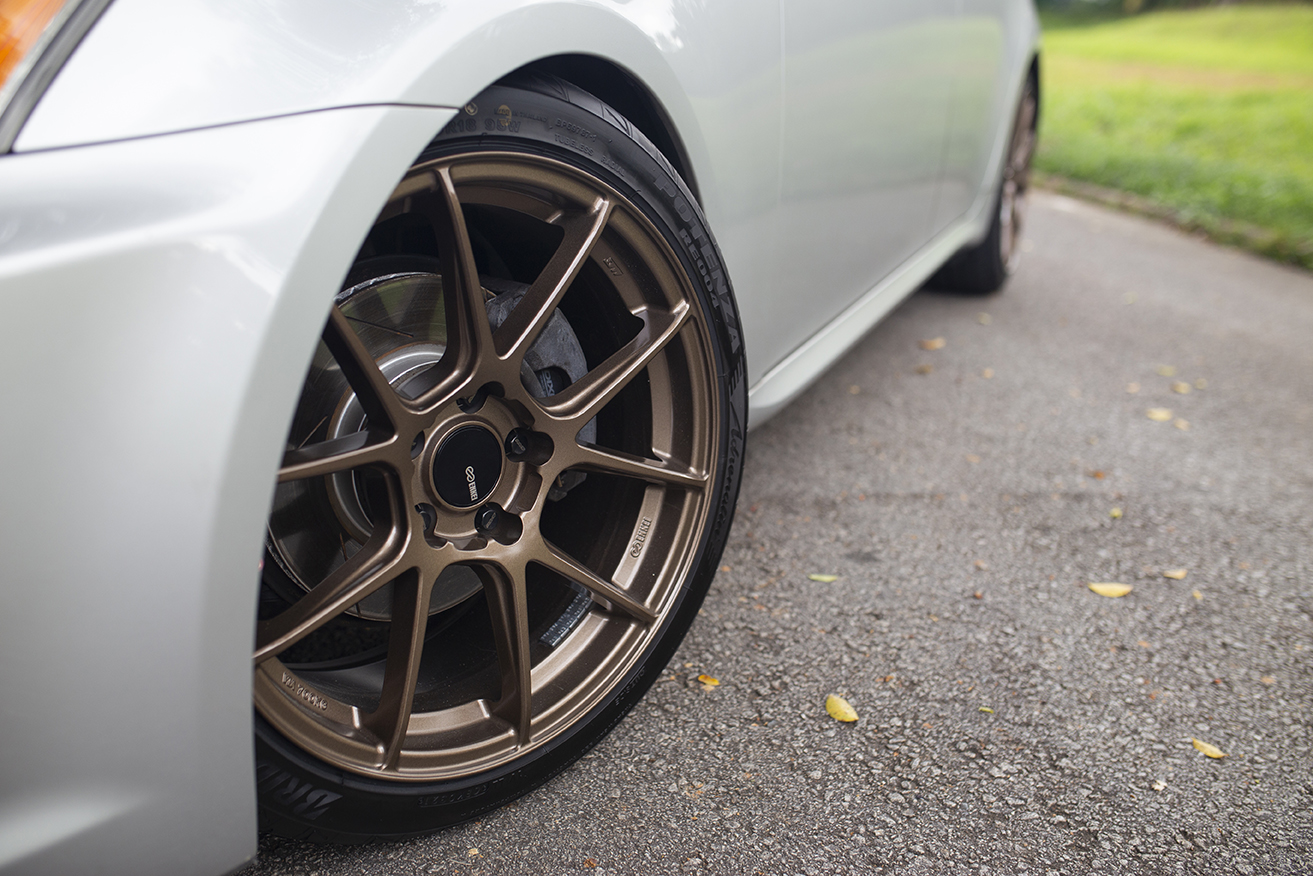 “Due to Singapore’s wet and rainy climate, one of the most important things I look out for when selecting tyres is how they perform on wet roads. The POTENZA Adrenalin RE004 has been really good at that, in addition to offering the dry weather grip that I need for spirited driving and enthusiastic cornering.”

Lexus plays the role as the luxury arm of Japanese auto giant Toyota Motor Corporation, and traditionally attracts the mature, well-heeled crowd. While that was once the truth, the Lexus brand in recent years has undergone a rejuvenation of their brand image.

In Singapore and other Asian markets, Lexus is beginning to be seen more as a brand for the younger generations, rather than for the well-heeled businessmen. Lexus’ recent innovations, combined with sleeker and bolder styling on newer models such as the UX crossover and RC coupe, have created positive talking points and drawn the attention of the younger generations. 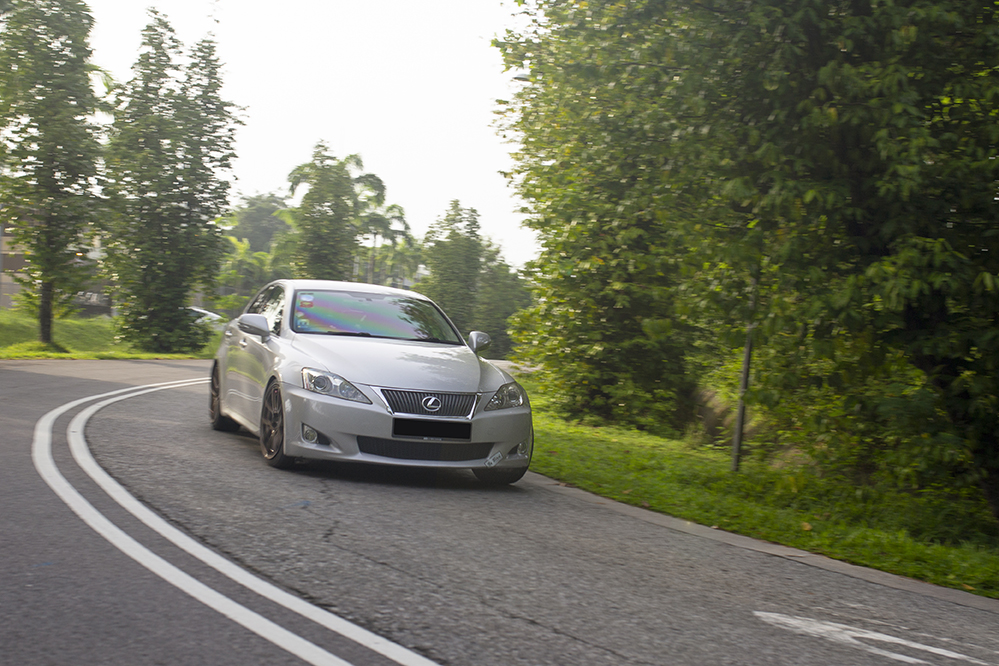 A trip to the former Formula One Malaysian Grand Prix circuit and road trips in Northern Malaysia are currently on John’s to-do list once the border reopens. This car, in John’s own words, is the perfect family ride, and is destined to stay with him for as long as possible.

"Very accommodating folks. The app is easy to use, and the service is convenient for busy folks who need an expert to handle their car needs."