This warm hatchback, on POTENZA Adrenalin RE004, is a continuation of a petrolhead pet project.

Sem chose the POTENZA Adrenalin RE004, Bridgestone’s street performance tyre, in the tyre size of 205/45R16 for his Suzuki Swift Sport.

As children, we used to look forward to new things – new clothes, new toys, and even new stationery! Hand-me-downs, on the other hand, were seen as a compromise. ‘Why can other people get new things but I can’t,’ we would ask.

Perhaps it’s a maturing or coming of age; but as we get more advanced in age, we tend to have a sentimental attachment to things, and treasure items that we’ve had around for a while. It’s like that set of cutlery you have in the kitchen cabinet – it’s not been used in ages, but it’s been in there for forever so it’s a bit of a shame to chuck it out.

In foreign countries, where COE is unheard of and vehicle lifespans are infinite, it’s a common occurrence to keep an old car around even after it’s been replaced. In Singapore, however, our exorbitant tax scheme and mandatory ten-yearly COE renewals prevent all but the most well-heeled from doing this. 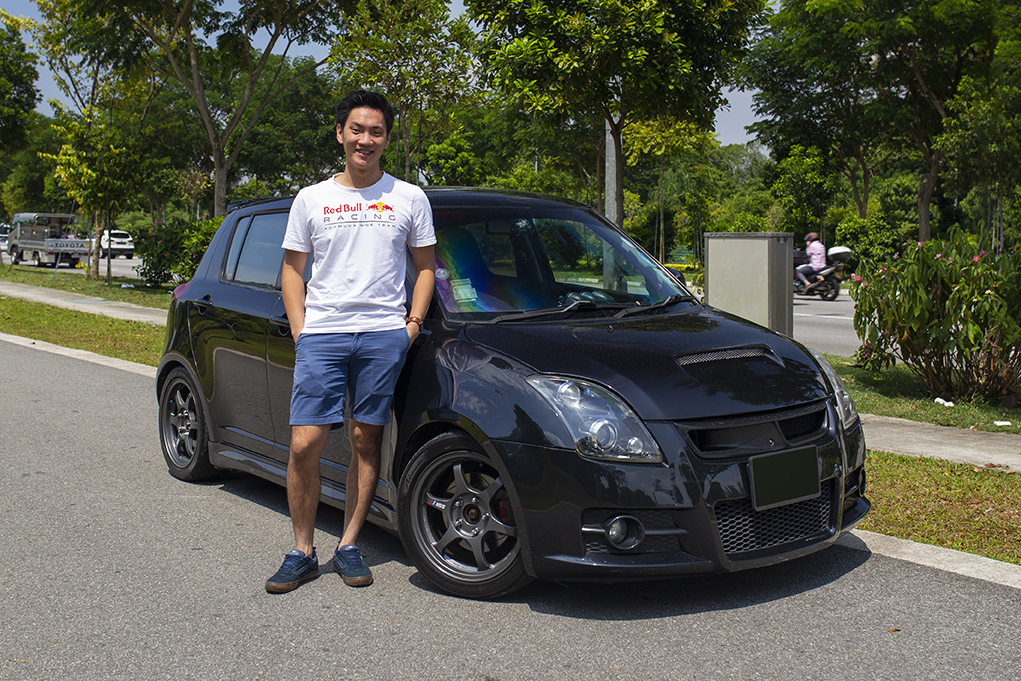 In this edition of Owners’ Rides, we feature Sem and his Suzuki Swift Sport, fitted with our POTENZA Adrenalin RE004 street performance tyre. Sem describes the Swift Sport – his first car – as something that’s small, cute, and handles well; plus, it’s equipped with a manual transmission for added driving involvement!

The previous owner of this car was none other than Sem’s brother, who took the chance to upgrade to something modern when COE prices were near an all-time low in 2018. Though it might’ve been his brother’s car, Sem would occasionally drive the Swift for errands and family outings; thus it occurred to him that it might be cool to renew the COE and keep the car in the family. 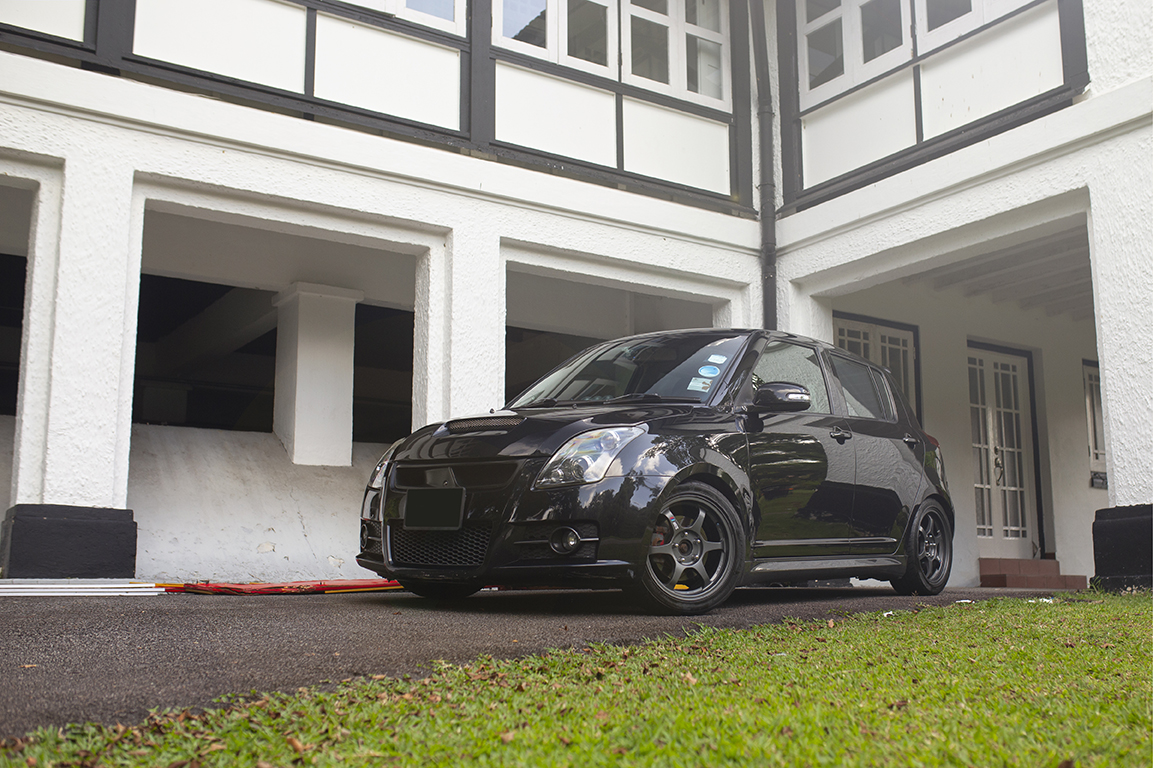 Sem’s Suzuki Swift Sport is a is a first-generation ‘ZC31’ model, with a 1.6-litre naturally-aspirated engine and 5-speed close-ratio manual transmission. Since its release in Singapore all the way back in 2006, the first-generation Swift Sport has been the de facto bargain warm hatch for enthusiasts.

Bang-for-buck has always been the appeal of the Swift Sport. One of Sem’s favourite modifications to the car are the wheels and tyres, which have provided a significant performance improvement without breaking the bank. 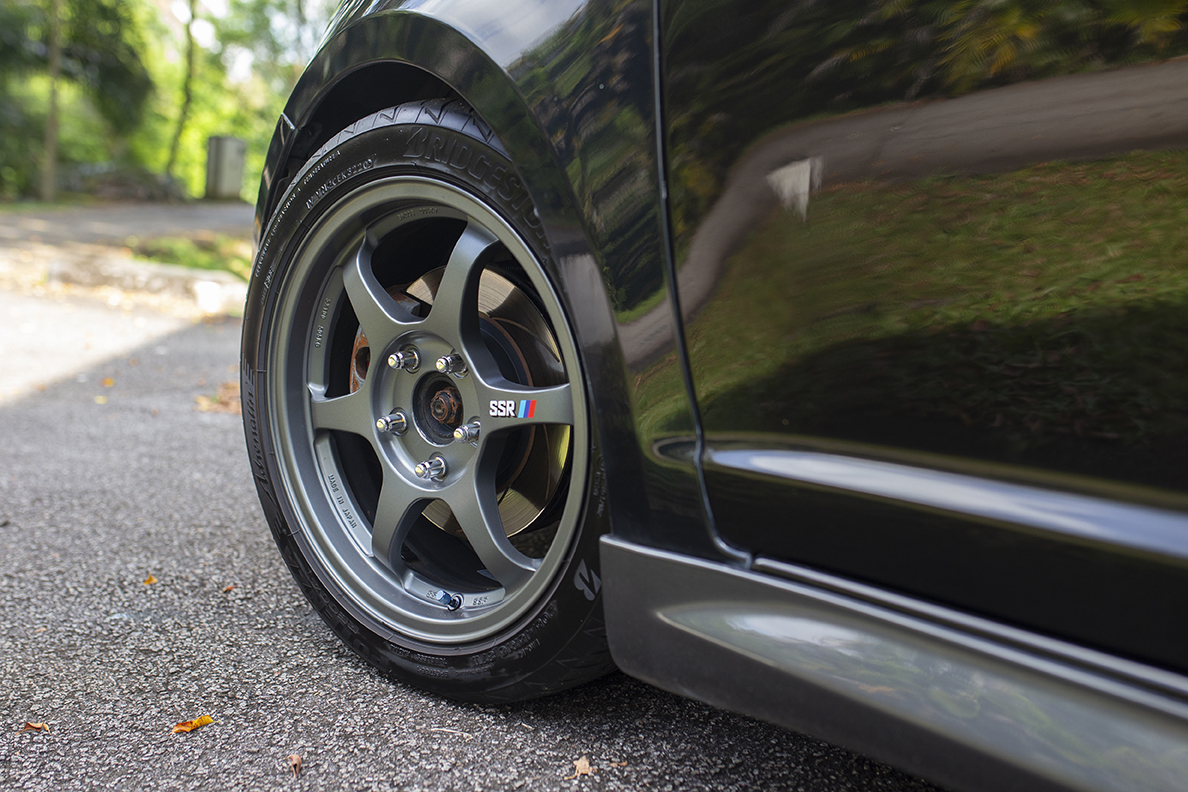 Sem’s first entry to the POTENZA range was with the Adrenalin RE003, introduced by Mighty Car Mods (MCM), an Australian automotive YouTube channel. Hosted by duo Marty and Moog, the channel focuses largely on DIY car modifications, and an insight into car culture. MCM’s favourable reviews of the Adrenalin RE003 thus led Sem to give them a try, and the rest, they say, is history.

The set of 16-inch SSR Type-C wore POTENZA Adrenalin RE003 rubbers for nearly 1.5 years, before its worn tread necessitated a replacement. Tremendously pleased with how his Adrenalin RE003 tyres performed, it was a natural progression for Sem to try the new Adrenalin RE004.

After a quick trip to Knight Auto Accessories, his regular Bridgestone authorised tyre dealer, the Swift now wore a brand-new set of POTENZA Adrenalin RE004 in the 205/45R16 size. For this daily-driver, the Adrenalin RE004 tyres offered a great balance of handling and comfort.

improvements across just one generation are significant

Some people might say that car enthusiasts are a hard-to-satisfy bunch, given the penchant for constantly modifying and improving cars. However, for some, it’s quite the opposite – being an enthusiast means finding little joys from tasks as simple as car washing.

Of course, personalisation and enhancement are still part and parcel of being a car enthusiast. Sem has added some choice exterior modifications to the Swift, including a Mini-style vented bonnet, B-Crews front grille, and a set of original Suzuki Mega Option projector headlights.

What’s personalisation without some stickers? Stickers from Sem’s favourite brands also adorn various panels of the Swift. On the front doors are decals from Japanese wheel manufacturer SSR Wheels and American designer Kaws. Round the back on the tailgate are decals from two of his favourite YouTube channels, Mighty Car Mods and Donut Media.

A zesty little hatchback the Swift Sport might be, but Sem has made it even better (and more fun) with choice performance enhancements. Up front, the engine breathes through a B-Crews intake box; while the other end, spent exhaust gases exit through a Sunline Racing GTSpec 60RRS exhaust system. On the suspension front, the factory setup has been replaced for a set of BC Racing V1 Series coilovers for better stability and a lower ride height.

In the cabin is where Sem spends most of his time, thus he’s added a couple of both aesthetic and functional modifications. What is most evident is the rather unconventional MUGEN steering wheel – typically seen on Honda cars – and a Monster Sport gear shift knob. On the functional front are a trio of Defi gauges housed in a Monster Sport gauge pod, displaying oil temperature, oil pressure, and water temperature.

Being a keen guitarist, Sem always has a playlist of alternative rock or pop rock on repeat while driving, such as the Good Charlotte album that was playing on the way to our meeting. He describes his little Swift Sport as akin to American rock band Blink-182 – known for being small but packing a punch, just like how the band is rec ognised for sounding full despite being a three-piece.

"Boo is super friendly, helpful and knowledgable to say the least. He's an old friend, and really takes a lot of pride in what he does along with his fellow colleagues and staff."

clickable image of JOHN'S LEXUS IS250

This compact executive sedan, on POTENZA Adrenalin RE004, is a motoring enthusiast’s ideal family ride.